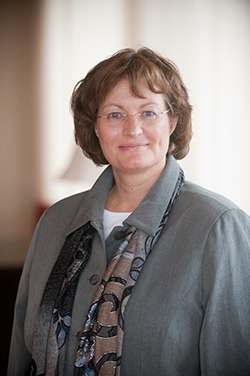 Syracuse University Vice Chancellor and Provost Eric F. Spina today named Karin Ruhlandt interim dean-designate of The College of Arts and Sciences. Ruhlandt has served as chair of the Department of Chemistry since 2009 when she was also named a Distinguished Professor, one of the highest honors for faculty whose exemplary leadership in teaching and research has advanced the University’s scholarly mission. Ruhlandt will formally assume the role of interim dean on July 1.

George Langford, who has served as dean of The College of Arts and Sciences since 2008, announced in December his plans to resign from his deanship on June 30 and return to full-time teaching, research and mentoring students in his academic specialty of cell biology and neuroscience.

“Karin’s extraordinary credentials and record of achievement make her a perfect choice to serve as interim dean for The College of Arts and Sciences,” says Spina. “A deeply collaborative scholar, she has earned international renown for her scholarship and research and successfully forged national and global research partnerships. At the same time, she has worked tirelessly to advance the goals of equity and opportunity across the sciences. Her passion for teaching and mentoring and her collaborative spirit have won the deep respect of both faculty and students, and those same qualities will serve her well in this important leadership capacity. It was clear from the number and variety of nominations that I received for Karin how widely respected she is in the college.”

A pioneering researcher in the area of alkaline earth metal chemistry, Ruhlandt helped establish what has become one of the largest National Science Foundation (NSF)-funded Research Experience for Undergraduates (REU) programs in the country, including a mutual summer research REU program with the Technical University, in Graz, Austria. She has mentored more than 20 doctoral candidates in her laboratory, several postdoctoral fellows, visiting faculty and a number of master’s and undergraduate students, many of whom moved into highly successful careers in industry and academia.

“I am honored Provost Spina has selected me to lead The College of Arts and Sciences, and I thank him for the opportunity. I also thank Dean Langford for his leadership and foresight of having hired many outstanding junior faculty during his tenure as dean. These faculty, along with many accomplished colleagues, have put us on a strong path forward and will help me shape the future of the college. The liberal arts mission is deep in my heart, and I strongly believe, a great College of Arts and Sciences with a vibrant and successful teaching and research mission will be at the center of Syracuse University, fueled by all its thriving departments. I am looking forward to working with the many talented faculty and staff to continue building a strong College of Arts and Sciences.”

As a scientist, Ruhlandt has made significant contributions to the emerging field of alkaline earth metal chemistry, an area of research that is exploring ways to use highly reactive metals (calcium, strontium and barium) to create new materials for the biomedical and high-tech industries. These metals are challenging to work with in the laboratory because they cannot be exposed to air or water without decomposition. Ruhlandt’s research group is among a select group of university-based researchers worldwide who have laid the experimental foundation that now enables scientists to study these metals in ways that were not possible a little more than a decade ago.

In 1997, Ruhlandt received an NSF Career Award for her pioneering research, which has since been continually funded. More recently, she received a prestigious NSF Special Creativity Award, which enables creative investigators an extended opportunity to attack adventurous, high-risk research opportunities.

Ruhlandt is the author or co-author of more than 150 scholarly publications, has presented lectures and papers at conferences and universities worldwide, is a reviewer for national and international granting agencies and numerous scientific journals, and has participated on a number of University committees and panels.

A native of Germany, Ruhlandt holds a Ph.D. from Philipps-Universität Marburg and was a postdoctoral fellow at the University of California, Davis, which is where she also conducted most of the experimental work for her doctorate. In 2003, she was a visiting professor at the University of Auckland, New Zealand, and at Monash University, Australia. She just returned to campus from a research leave as Fulbright scholar in Graz, Austria.

Are Semiconductors the Picks & Shovels Play for the Tech Industry

Patrick Penfield, professor of supply chain practice and Director of Executive Education in the Whitman School, was interviewed by the Australian podcast Equity Mates Investing for the episode titled “Are Semiconductors the Picks & Shovels Play for the Tech Industry.”…

Robert Thompson, Trustee Professor of radio, television and film and director of the Bleier Center for Television and Popular Culture in the Newhouse School, was quoted by WGBH (Boston) for “The Chair puts college professors under TV lights.” Thompson, an expert…

Robert Thompson, Trustee Professor of radio, television and film and director of the Bleier Center for Television and Popular Culture in the Newhouse School, was quoted by The Washington Post for “On Sean Hannity’s Fox News show, it’s still Trump,…

Mark Jacobson authors “The U.S. Turned Away Jewish Refugees in 1939. We Must Not Repeat History With Afghans Fleeing the Taliban.”

Mark Jacobson, assistant dean for Washington, D.C. programs in the Maxwell School, wrote an opinion piece for Time Magazine titled “The U.S. Turned Away Jewish Refugees in 1939. We Must Not Repeat History With Afghans Fleeing the Taliban.” Jacobson, a…