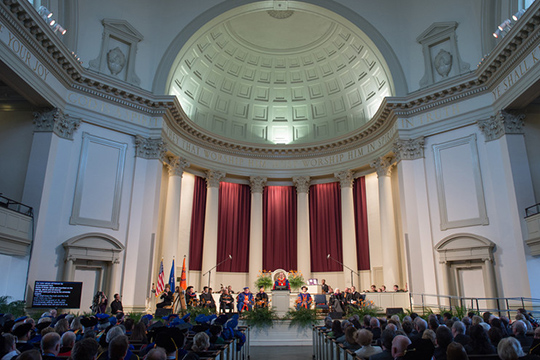 Kent Syverud’s inauguration as Syracuse University’s 12th Chancellor and President captured all the grandeur of this historic event.

He is thankful for the University—for all the knowledge, love, hard work, research and learning that have gone into its 144 years. He thanked the students, faculty, trustees, alumni and staff, and all those involved in the day’s events and ceremonies. He thanked his family and friends and asked everyone listening to remember the people in their lives who have sustained and encouraged them.

“I wish my parents were alive to be here today. I think they would be happy,” said Syverud, during his remarks in Hendricks Chapel Friday. His mother would also have given perspective.

“Janet Thatcher Syverud would be whispering in my ear right now, if she could, the following words: ‘Kent, this day is not about you. It is about Syracuse University,’” Syverud said. “And she would be so right.”

The inauguration of Kent Syverud as the 12th Chancellor and President was a reflection of the University’s past, an examination of where it must go and a celebration of community and its greatest asset—its students. 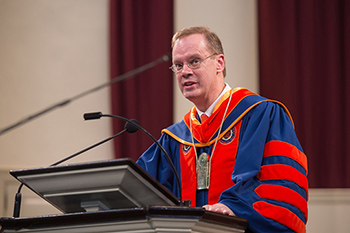 Under the chapel dome, Syverud spoke to an audience of hundreds and many more watching online, as he challenged the University to aim higher.

“We live in a time of great challenges for the world and for universities. The challenges come from every single direction. They are economic, technological, social, spiritual and political,” Syverud says.

The way to focus on the future is to keep connected to the University’s unique history and values. As with his favorite quote from the Constitution, “No title of nobility shall be granted by the United States,” Chancellor Syverud sees Syracuse as a University that attracts unentitled people willing to work for their achievements.

“We are a University that opens its doors to those who are hungry for knowledge and advancement, whether they be middle class or rich or poor, and whether they be American, Native American or from abroad,” he said.

As in the past, the insights of all its people will lead the University into its future, he said. “All I can do today is start a dialogue about the direction we might go in.”

The Chancellor then put forth four areas that he believes are essential for the University to thrive.

“First, we must enhance both undergraduate education and the undergraduate experience at Syracuse,” Chancellor Syverud said. He called for building an “unrivaled” College of Arts and Sciences that “affords a distinctive, broad and deep education in the liberal arts and sciences to all of our students.”

He wants to students to have an even more distinctive experience and opportunities that will forever define them as “Syracuse.” This will also involve addressing all areas of student life on campus, where students live, eat, work, study and interact with each other and the faculty and community.

“Second, we must empower research excellence at Syracuse,” Chancellor Syverud said. Great research is based in collaboration, drawing in student and faculty and “builds on University-wide investment and on strong graduate programs that are designed around careful strategic choices of areas of need and opportunity.”

Third, Chancellor Syverud said, the University must embrace change. “To get better, we need to take risks; we need to embrace the entrepreneurial spirit that animates so many parts of this campus, and we need to move nimbly.”

Syracuse’s history is filled with examples of moving ahead through enterprising ideas, as represented in the way the University embraced global studies ahead of almost all others, leading to SU Abroad; in the development of the first information school; in the prominence of the Newhouse School of Public Communications; and in the way veterans were welcomed at the University after World War II, when many did not. 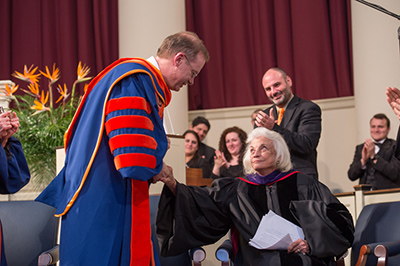 Chancellor Syverud thanks U.S. Supreme Court Justice (retired) Sandra Day O’Connor for her reflections during the inauguration ceremony Friday in Hendricks Chapel. Chancellor Syverud served as a law clerk for Justice O’Connor in 1984.

Which led into Chancellor Syverud’s last charge. “Fourth, and finally, I believe Syracuse University must once again become the best place for veterans,” he said.

The University is positioned with its “glorious past in that area” and through the cutting-edge research and service of the Institute for Veterans and Military Families and the work of University College.

“We have an unrivaled capacity to bring to bear our expertise in the professions, in disabilities, in entrepreneurship and information, and in the arts and sciences, for the benefit of our University and to help those who have borne the battle and the families,” he said.

By integrating all of these ideas into our aims for the University over the next 10 years, the University will become a stronger institution, Syverud said.

“I believe we will become a greater university, and along the way will enhance all the communities that matter to us and to the world. The greatest contribution this University can make to this city and to this region, so important to us, is to be a great, thriving and engaged international research university,” said Chancellor Syverud, who noted the University’s academic neighbors as collaborators.

Before Chancellor Syverud’s remarks, the inaugural ceremony began with a formal procession—including the Chancellor’s wife, Dr. Ruth Chen, a professor of practice in the College of Engineering and Computer Science; their three sons; and other family members—followed by an invocation by Hendricks Chapel Dean Tiffany Steinwert and a presentation by the ROTC Army and Air Force during the U.S. National Anthem, led by the University Singers.

Boris Gresely ’15, Student Association president, welcomed the Chancellor on behalf of the students, noting his appreciation for the Chancellor’s openness in meeting and communicating with students. “His emphasis on over-communication, of continuously interacting with the student body, of hearing their thoughts and of listening to their questions is undoubtedly one of his greatest strengths,” he said.

Others who welcomed him were Oren Lyons ’58, H’93, faithkeeper of the Turtle Clan of the Onondaga Nation and a chief of the Council of the Chiefs of the Haudenosaunee, and Professor Suzanne Baldwin, the Michael G. and Susan T. Thonis Professor of Earth Sciences.

“We stand before you today confident that you will achieve greatness here, through your patience, hard work, loyalty and cheerful, can-do attitude,” Baldwin said. “We stand beside you to help achieve success in our journey together.” 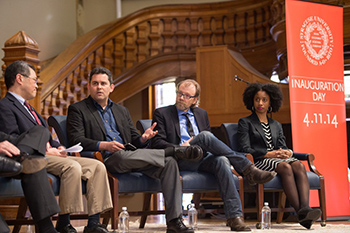 Dan Pacheco, Peter A. Horvitz Endowed Chair in Journalism Innovation in the Newhouse School, (second from left) answers a question as part of the academic symposium on “Great Universities in the Next 25 Years” Friday in Setnor Auditorium. Panelists also included, from left, Shiu-Kai Chin, professor of electrical engineering and computer science, College of Engineering and Computer Science; George Saunders, professor of English, The College of Arts and Sciences; and Marcelle Haddix, assistant professor and director of English Education Programs, School of Education.

Representing the Board of Trustees, Renée Schine Crown ’50, H’84, a Syracuse University life Trustee, spoke of inauguration day as the beginning of a new chapter in the University’s history.

“For all of us, it marks the continuation of a long legacy in which time and again, our University welcomed just the right leader at just the right time,” Crown said. “A leader who would build on our strengths and core values, our intrepid spirit and our capacity for innovation to address the evolving challenges and needs of the times, and steer us into a new era of promise and prosperity.”

Reflections were also given by U.S. Supreme Court Justice (retired) Sandra Day O’Connor, for whom Chancellor Syverud served as law clerk in 1984. “I’ve been telling Kent Syverud that he should be a University president for more than 15 years, and he finally listened to me,” O’Connor said.

O’Connor recalled his dedication to his work and the time he helped her with final edits on an important dissent involving the separation of church and state the same night his first son was born. His son Steven “was one of my first grandclerks,” she said.

“I’ve watched Kent throughout his career, and I want you to know that the important things about him have not changed in those years. He is very intelligent, he has wonderful values, he cares about people and he can write and speak extremely well. He is going to serve you well and make you proud,” O’Connor said.

“Enthusiastically recommended by the Chancellor Search Committee last fall and unanimously selected by an equally enthusiastic Board of Trustees, Chancellor Syverud is an outstanding scholar, an award-winning teacher and an astute and revered academic leader,” Thompson said. “We are deeply fortunate to have such an accomplished and dedicated leader at the helm of Syracuse as it continues to build on its standing as one of the world’s great private universities.”

Thompson then placed the Chancellor’s medallion around Chancellor Syverud’s neck. “I charge you to fully execute faithfully the governance of this institution, and within that framework to provide the free environment in which sound learning and academic scholarship may flourish,” Thompson said.

As part of the day’s events, the University community joined the Chancellor for an invigorating morning run around campus and later an academic symposium, bringing together Syracuse experts in a variety of disciplines to discuss “Great Universities in the Next 25 Years” in Setnor Auditorium. 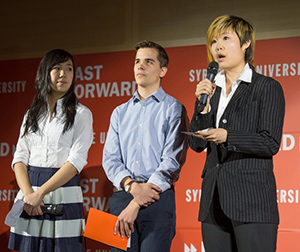 Tiffany Pau ’17, Jonathan Anthony ’17 and Ruo Piao Chen ’17, from let, present their team’s idea during the Fast Forward event Friday in the Hergenhan Auditorium in Newhouse 3. The Freedom By Design team, which is seeking to build a unique ramp for the Westminster Church, was one of 13 winners of the competition initiated by the Chancellor.

Students were the focus of the Fast Forward event, a competition for students to share ideas for making a positive impact on the University and the world, with the 13 winners presenting to the Chancellor and campus community. The student winners now have funding in place to complete their ideas by Dec. 31.

Following the formal inauguration ceremony, a celebration for the University community was held with food and music inside tents on the Quad. In the festive atmosphere, Chancellor Syverud mingled with guests and posed with students for photos.

Marlena Ahearn ’17, a newspaper and online journalism student in the Newhouse School, was out on the Quad where the marching band was in full swing following the Hendricks ceremony.

“I was happy to be there and I thought who they brought—Sandra Day O’Connor—was incredible,” Ahearn said. “It’s an exciting Orange day.”

Ahearn appreciates the efforts Chancellor Syverud has made with students. “He’s really humble and makes an effort to be in contact with undergraduate students and it’s very helpful with us as far as communication,” she said.

To see videos of the day’s events, read the speakers’ remarks and view other related content, visit inauguration.syr.edu.