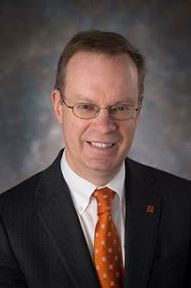 Kent Syverud is Chancellor and President of Syracuse University. Appointed by the University’s Board of Trustees in September 2013, he assumed the leadership post in January 2014, becoming the 12th leader of the University since its founding in 1870.

Chancellor Syverud came to Syracuse University from Washington University in St. Louis, where he served as Dean and Ethan A.H. Shepley Distinguished University Professor since 2006. Prior to that, he served eight years as Dean at Vanderbilt Law School. During his tenure at Washington University, he led efforts to create university-wide programs in Washington, D.C., in partnership with the Brookings Institution and in New York in partnership with the Olin School. He also advanced efforts to expand online education opportunities, including development of an innovative online master’s degree program.

Chancellor Syverud has served since 2010 as one of two Independent Trustees of the Deepwater Horizon Oil Spill Trust, a $20 billion fund created by BP in negotiation with the White House to pay claims arising from the BP oil spill in the Gulf of Mexico. A 1981 graduate of the University of Michigan Law School, he also was an expert witness for the University of Michigan in the landmark affirmative-action case Grutter v. Bollinger.

After earning a Juris Doctor and an M.A. in Economics, Chancellor Syverud went on to serve as a Law Clerk for Judge Louis Oberdorfer of the U.S. District Court for the District of Columbia and for U.S. Supreme Court Justice Sandra Day O’Connor. He practiced law in the fields of litigation and insurance at Wilmer, Cutler & Pickering in Washington, D.C., from 1985 to 1987. From 1987 to 1997, he served on the faculty of the University of Michigan Law School, earning tenure in 1992 and advancing to Associate Dean for Academic Affairs in 1995. He has been a Visiting Professor at the Cornell Law School, the University of Pennsylvania Law School, and the University of Tokyo Faculty of Law and Politics.

A past Editor of the Journal of Legal Education, Chancellor Syverud also has served as President of the American Law Deans’ Association, as Chair of the Board of the Law School Admission Council, and as President of the Southeastern Association of American Law Schools. He is a past Chair of the accrediting authority for law schools in the United States, the ABA Section on Legal Education and Admissions to the Bar; and a past Chair of the Board of Access Group, which is evolving into the largest funded nonprofit organization in the world benefitting legal education.

Chancellor Syverud has published numerous law review articles concerning civil litigation, insurance law, and negotiation as well as a monograph on the professional responsibilities of insurance defense lawyers. His more recent writings have concerned legal education and service as Dean, including the articles “Three Principles of Effective Deaning,” “A Parable of Law School Leadership,” and “How Deans (and Presidents) Should Quit.” A frequent speaker at conferences in the United States and abroad, he has received outstanding teaching awards from students at both the University of Michigan and Vanderbilt University.

Chancellor Syverud and his wife, Dr. Ruth Chen, are the parents of three grown sons: Steven, Brian and David. Dr. Chen, an environmental toxicologist, holds a Professor of Practice appointment in the L.C. Smith College of Engineering and Computer Science at SU.

Mary Lovely, Professor of Economics in the Maxwell School of Citizenship and Public Affairs, wrote commentary for CNN, “Trump’s removal of Hong Kong’s special status hurts the US more than China.” President Trump recently declared that he would remove Hong…

Dessa Bergen-Cico writes “Self-Care for Social Reengagement in the Era of COVID-19.”

Dessa Bergen-Cico, an Associate Professor of Public Health in Falk College, wrote the commentary piece for U.S. News & World Report titled, “Self-Care for Social Reengagement in the Era of COVID-19.” Professor Bergen-Cico, who focuses much of her research on…

“Fighting Diabetes and Obesity in Veterans.”

Robert Doyle, The Laura J. and L. Douglas Meredith Professor of Biochemistry and Biotechnology in the College of Arts and Sciences, was interviewed by WSYR’s Bridge Street for the segment, “Fighting Diabetes and Obesity in Veterans.” Professor Doyle has “received…

“Would resuming or halting the NBA season help the league’s efforts to fight racial inequality?”

African American Studies Department Chair and Associate Professor Herb Ruffin was interviewed by USA Today for the article “Would resuming or halting the NBA season help the league’s efforts to fight racial inequality?” The article weighs whether NBA players should…