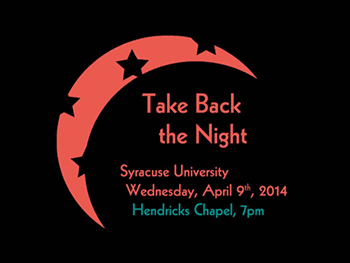 From April 7-9, the Advocacy Center, within the Division of Student Affairs, will host a series of Take Back the Night activities and events dedicated to raising awareness about sexual and relationship violence. Members of the campus and local community are invited to take a stand against violence, raise awareness about attitudes that perpetuate violence and discuss ways to work together to create a safer, more respectful community.

In January 2014, in recognition of the importance of addressing the alarming rates of sexual assault on college campuses and the impact these crimes have on college students, President Obama established the White House Task Force to Protect Students from Sexual Assault. In announcing the formation of this task force, the White House acknowledged that everyone has a role to play in preventing interpersonal violence and stressed the importance of keeping in mind the stories of survivors in the campaign to end sexual assault and to support survivors. This message is at the core of Take Back the Night.

“The goal of Take Back the Night is to provide a forum for educating community members about the impact of sexual and relationship violence, and the potential for each individual to take action to prevent interpersonal violence,” says Janet Epstein, director of the Advocacy Center. “Take Back the Night brings students, staff, faculty and members of the greater Syracuse community together to show support for those who have been affected by interpersonal violence and to demonstrate the ability we have to create change when we all come together for a common cause.”

Take Back the Night activities help spread the message that every individual plays a vital role in creating a community that is a safe and caring place to live. These events help bring Syracuse University closer to the goal of becoming a community of “empowered bystanders”—individuals who take action when witnessing potentially harmful behavior and support those who have experienced sexual and relationship violence. Take Back the Night is a time to celebrate the commitment and courage of those who have taken the pledge to become empowered bystanders, and to encourage others to do the same.

Following is the list of activities for Take Back the Night 2014. The rally and march are open to the public. Free parking is available in the SU Harrison/Lehman lots.

Students and community members will have several opportunities to pledge that they will not use their hands for violence. Students can visit the Hands Against Violence tables at various campus locations and take part in an “Empowered Bystander” activity at the Schine Student Center on April 7, 8 and 9.

On Wednesday, April 9, community members are invited to gather at Hendricks Chapel for a rally beginning at 7 p.m. Marc Peters will be the keynote speaker at this event. Peters is the global communications and campaigns manager for MenEngage, a network of NGOs working around the world to engage boys and men in the movement for gender equality. Peters received a B.A. in policy studies and newspaper journalism from Syracuse University and a master’s degree in public service from the University of Arkansas—Clinton School of Public Service. While at Syracuse University, Peters was a member of A Men’s Issue. He is co-founder of MasculinityU, a national initiative that leverages social media to connect with young men and challenge their popular conceptions of masculinity. Peters says that he is a “proud member of the Millennial generation and has spent much of his life working to get his peers involved in social change campaigns.”

Following the rally will be the Take Back the Night march. At the conclusion of the march, a speakout will be held in Hendricks Chapel, where anyone who has been impacted by sexual and/or relationship violence is invited to speak. Due to the sensitive nature of the speak-out, it is closed to the media.

For more information about Take Back the Night activities, contact Janet Epstein at 315-443-7098 or epsteinj@syr.edu.