A level of computing power comparable to “a cloud in a box,” and typically accessible only from the inside of an enterprise-class computing work environment, is now available to students and faculty at the School of Information Studies (iSchool) daily, thanks to a major in-kind gift from the largest technology company in the world. 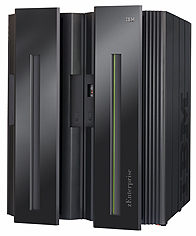 IBM’s new z196 mainframe computer is one of the industry’s fastest and most scalable enterprise systems.

The gift is IBM’s loan of its z196 enterprise-class computer to the iSchool, a step that creates an unprecedented level of computing capacity for student and faculty use. The z196, notes Kevin Cleary ’79, IBM vice president and partnership executive, is “one of the industry’s fastest and most scalable enterprise systems.”

“This machine creates a computing environment of the kind we have not had before, and the potential for lots of very interesting and exciting things we couldn’t do previously because of capacity limitations,” explains David Dischiave, associate professor of practice at the iSchool. “This really positions us to deal with big, interesting problems, and gives us computing resources that are unsurpassed, with a scale that supports thousands of students, each on a separate piece of the system.”

Coupled with the IBM-loaned z10 system already in place at the University’s Green Data Center, the iSchool now has pace-setting, large-scale teaching capacities akin to “hundreds of thousands of servers–expansive enough to run any state’s governmental agencies, and more,” Dischiave explains. “I don’t know of any other educational institution in the world that can say they have the kind of capacity we have. We are probably the leader of any institution around the world in this large-computing area. So it’s like, ‘pinch me now, I must be dreaming.’”

As an example of its practicality, iSchool students currently working with a student team in India determined they needed some additional computing capacity to continue their research. With the z196’s availability, “within minutes, we were able to carve out a piece of this computer for them. We didn’t have to worry about going out and buying computers, or where to find the money to do that,” Dischiave notes.

Cleary notes that the z196 will allow faculty at the iSchool and other SU schools to train “the next generation of information professionals on being able to solve really big problems using state-of-the-art computing.” The zEnterprise infrastructure “enables academic and industry partners to build and showcase end-to-end world-class security projects in a non–production and educational environment,” he says, training that is crucial to enterprise computing. “Businesses need secure, proven solutions across a variety of workloads, including traditional transaction processing, mobile, social media and big data, and they need the security engineered in, rather than cobbled together or bolted on.” Cleary says that is precisely what IBM’s zEnterprise infrastructure provides.

The years-long synergy between SU and IBM began modestly in 2006 and has grown significantly over eight years. When IBM and iSchool faculty members first began working together, it was on a level as basic as consultation on possible course curricula that could be taught at the iSchool, Dischiave remembers. Both parties are extremely pleased with how the relationship has developed. “IBM is the largest technology company in the world, and we have a fantastic partnership with them,” Dischiave says.

Adds Don Resnik of IBM’s System Z Academic Initiative, the IBM/SU pairing is “one of the most incredible relationships between industry and academia that I’ve personally experienced in my years working with universities.”

Dischiave notes that the value of the relationship with IBM is significant well beyond the monetary aspects of obtaining loaned computers. “This partnership is more than just IBM giving us equipment. It’s really a long-term partnership where IBM has been hiring our students, they have been providing internships, course content and expertise on problem-solving,” Dischiave says. “The partnership cuts across many divisions aside from big computers. We are fully invested in data analytics with IBM and in their software division and Rational Software projects, so it’s broader than just the enterprise piece.”

“Everyone involved at IBM with the Syracuse University projects does it out of passion for the students,” Resnik adds. “We all are excited about the opportunities that a new mainframe on campus will enable. Just imagine processing 40,000 transactions per second from mobile to mainframe, with the highest level of security on the planet.”

From its start as an invitation to explore exchanges in curriculum ideas, free software and some hardware and services, the initiative has grown significantly, says Alan Lincoln, SU’s senior director of corporate relations. Aside from the obvious benefits of the loan of multi-million-dollar computing equipment, the entities have an ongoing, active intellectual exchange with iSchool and SU faculty collaborating as contributors at IBM conferences and in the IBM operational sphere. Lincoln characterized the partnership as “unique in the academic world.”

Mark Weldon, SU executive director of corporate relations, reiterated that view. “Our longstanding partnership with IBM continues to deepen and benefit SU. Our faculty collaborate with them on front-edge projects, like our Green Data Center, and our SU students gain hands-on mainframe skills from IBM equipment loans like the z10 and z196,” Weldon says. “IBM is also expanding its hiring of SU grads across a spectrum of majors, widening our already-large alumni population in the company.”

Many people at Syracuse are part of building and maintaining that partnership, Dischiave notes. They include Lincoln and Weldon; College of Computer Science and Engineering colleagues and faculty member Roger Chen; and iSchool faculty member Susan Dischiave. She has played a significant role, such as making presentations at and serving as a judge at IBM and industry conferences, as well as contributing ideas about curriculum development and data and system testing.

Most importantly, Dischiave says, the IBM/SU initiative has created unprecedented opportunities for students. “We’ve got an industry partner that is committed to SU, and this is a major commitment,” Dischiave says. “The training available to students attracts other employers that we wouldn’t normally be able to get, like the Bank of America, Wells Fargo, Compuware, JP Morgan and others that are coming here to hire for large enterprise-class computers–and for the problem-solvers and critical thinkers who look at problems in a different way because of the way this enterprise computing trains students to think.”

IBM’s academic initiative with SU has always been built on “a common goal to develop students with enterprise computing skills, our trust and confidence in each other, and the ease with which we communicate,” Resnik notes. Most of all, he says, it is characterized by the quality that “everyone involved at IBM with the Syracuse University projects does it out of passion for the students.”