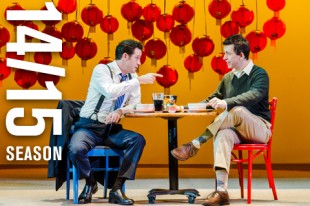 Kicking things off in September is the raucous comedy and 2013 Tony winner for Best Play, “Vanya and Sonia and Masha and Spike,” followed by the haunting and haunted “The Piano Lesson,” August Wilson’s Pulitzer Prize-winning drama.

Nearing the end of the season, Syracuse Stage will partner with South Africa’s internationally acclaimed Market Theatre on the Tony Award-winning classic, “Sizwe Banzi is Dead,” and closing the season is “Other Desert Cities,” a sharp and smartly funny new play mixing politics and art.

“The 2014/15 Season puts family front and center, with all the humor and complications inherent in human relationship,” notes Timothy Bond, producing artistic director of Syracuse Stage. “While each play is about different families with distinct circumstances, there is an underlying commonality that in so many ways defines the season. That is hope. While each family struggles, and characters butt heads, a way forward is found through understanding, forgiveness, humor and love.”

In addition to partnering with the internationally acclaimed Market Theatre of South Africa, the 14/15 season includes co-productions with some of America’s leading theater companies: Seattle Repertory Theatre, McCarter Theatre in Princeton, N.J., and Portland Center Stage in Oregon.

Season subscribers will be contacted in the coming weeks with information on renewing their seats for the 14/15 season. Those interested in purchasing new season subscriptions can call the Syracuse Stage Box Office at 315-443-3275 for information. Tickets for individual shows will go on sale toward the end of summer.