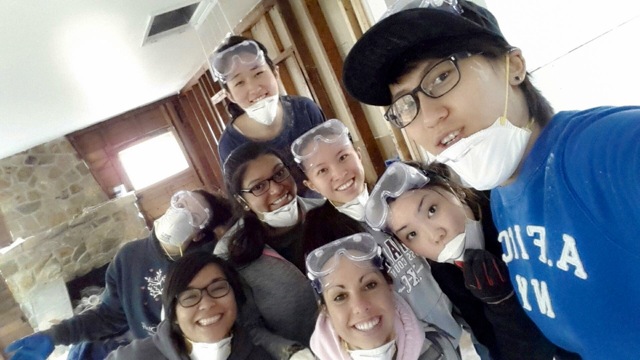 Students with the SU/ESF chapter of Habitat for Humanity gather inside one of the New Jersey homes they helped renovate over spring break in the ongoing recovery efforts after Hurricane Sandy.

Steffi Francis ’14 and Denisse Ortiz ’17 planned for the hard work and long days as they painted, cleaned and caulked their way through houses being rebuilt from Hurricane Sandy. They didn’t expect the greatest rewards would be in something less tangible.

Francis and Ortiz were part of a contingent of students with the Syracuse University/SUNY College of Environmental Science and Forestry chapter of Habitat for Humanity who spent their spring break on the Jersey Shore, still rebuilding from the 2012 disaster. Another group of students went to Chicago to work on homes.

“Just as with Hurricane Katrina, people are still reeling from the aftereffects of the disaster. Hurricane Sandy affected almost 200,000 people,” Francis says. “Some families more than a year later still have not been able to return to their homes.”

Students learned from Lizzie Berardi, the New Jersey chapter’s public relations coordinator and a homeowner affected by the storm, that people in Seaside Heights returned to their homes two weeks after the storm—only to retrieve necessities—and found devastating wind and, worse, water damage that destroyed furnishings and the structure with damp and mold.

Funding from the federal government and the work of organizations like Habitat for Humanity have made steady progress on rehabilitating and rebuilding efforts, but much work remains. 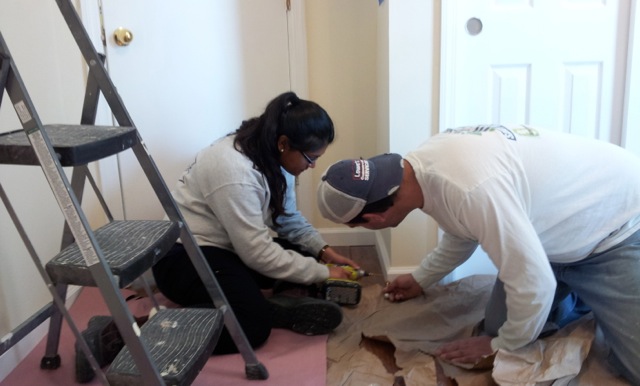 A student works with a construction crew member to help with the detailing at a New Jersey home.

Students got a view of the new-build homes that the habitat chapter had worked on. “Northern Habitat’s Director Susan Fichtner and retired engineer Joseph Read proudly gave us a tour of a home that they had built for a family that fell on hard times and explained the somewhat complex process of getting donated or discounted fixtures from big companies,” Francis says.

The construction supervisors and volunteers also welcomed the students as they joined in the efforts. “The dedication of the full-time workers and volunteers was astounding,” Francis says. “Construction supervisor Frank Araneo made every day we worked entertaining, as well as a learning experience by helping us understand the history of the homes.”

Construction workers Mike Borcina and Leif Myhre also showed students how to install countertops and taught them how to caulk, among other tasks that the students helped with in rehabbing the homes.

“The Seaside Heights and Brick Township houses had already been built, so we helped repaint and clean the houses. Some of us were able to use a drill and some other tools,” Ortiz says. “On the last day, we insulated some of the walls in another house.”

Returning to their homes

By the end of that week and the following one, both the Seaside Heights and the Brick Township homeowners were going to be able to return to their homes, Ortiz says. 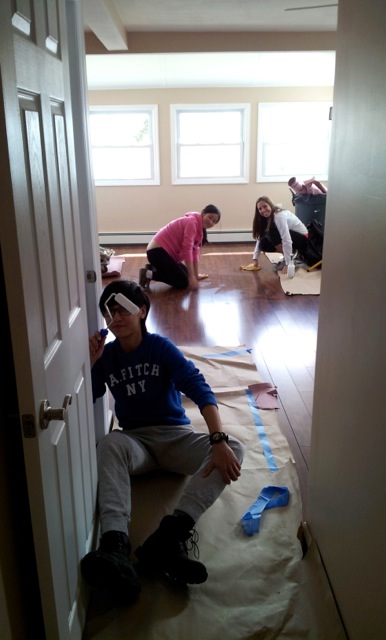 Students finish up painting and cleaning inside a Habitat home before residents move back in.

Those are important milestones for those families as they recover—and for the friends, neighbors and strangers from such distant places as Syracuse who want to assist in that recovery.

“For me, this trip was an amazing experience, since I didn’t realize how much people are still dealing with the consequences of this hurricane,” Ortiz says. “What I liked the most was getting to know all the volunteers who made it possible for this nonprofit organization to bring families home, and listening to the daughter of one of the homeowners speak about her parents’ story.”

Students helped restore the childhood home of Dawn Parlapiano and her parents’ current home. “The most meaningful and rewarding experience was meeting Dawn,” Francis says. “Her parents had worked all their adult lives and saved for a home to raise their kids. When Sandy hit Dawn’s parents, especially her mother, felt as though everything they had worked hard for and sacrificed in their life was gone.”

Dawn Parlapiano and her sister contacted Habitat for Humanity on their parents’ behalf and the rebuilding process began.

“Dawn’s story helped all of us understand the sadness, the loss and the chaos families felt and the realities of life post-Sandy,” says Francis, who related the story to her own mother’s struggle raising her as an immigrant in the United States. “Like the Parlapianos, our home is a reflection of sacrifices made, hard work, strength and love. Hearing Dawn’s story left a particular kind of connection and understanding. Habitat for Humanity helps people pursue their American Dream and I am so grateful to have been a part of that experience.”