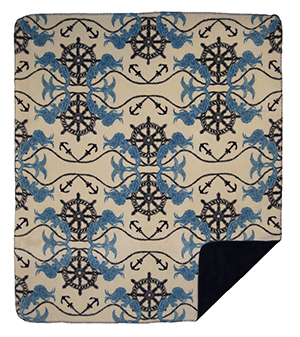 “Fathoms Below,” the award-winning design by Kari Smiraglia

Kari Smiraglia, a senior fashion design major in the Department of Design in the College of Visual and Performing Arts, was named the grand prize winner of the 2013 Design-a-Throw competition sponsored by Monterey Mills, one of the nation’s premier suppliers of knitted pile fabrics. The award was announced in a press conference at SU on March 4.

Sponsored by Monterey Mills’ Denali Home Collection and Designathrow.com, 182 students from across the country participated in the unique opportunity to design a throw to be added to Denali’s 2015 collection.

“Our goal was to utilize the talents of students to develop new designs into the line.  We were not only overwhelmed by the response from numerous design schools that participated but were also amazed at the level of creativity,” said Monterey Mills President and CEO Daniel Sinykin. “We are awarding the top five designs, but many of them may become part of our line in the future.”

The Denali Home Collection has been a favorite in the retail market since 1998, with rustic and Western designs. The company reinvented the line in 2011, adding home décor and nautical patterns to round out the selection. “In the past, we added three or four new patterns a year,” Sinykin commented.  “This year we added 40, and are very excited about the future.”

Sinykin said that the company is already working on the patterns submitted. The Fall 2014 Design-a-Throw Contest theme, also announced March 4, is college themed. More information on the 2013 winners, and the 2014 competition, can be found at http://www.designathrow.com.