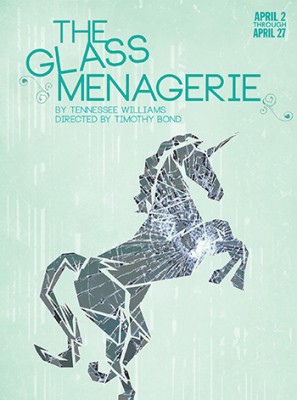 “The Glass Menagerie” is the play that launched Pulitzer Prize-winning playwright Tennessee Williams’ career and is among the masterworks of the American stage. Drawn from Williams’ life, this moving play explores the illusory nature of dreams and the fragility of hope.

Abandoned by the father of her children, Amanda is obsessed with finding a suitor for her shy and vulnerable daughter, Laura. Tom, the restless and sensitive son who narrates the story, eases his frustrations with nighttime escapes “to the movies.” At Amanda’s urgings, Tom asks a co-worker to dinner. Can this “gentleman caller” offer any light to these bruised souls clinging to the tattered edges of lost dreams and faded hopes?

“The Glass Menagerie” performs April 2-27 in the Archbold Theatre at the Syracuse Stage/Drama Complex. It is recommended for ages 13 and up. Tickets can be purchased online at http://www.SyracuseStage.org, by phone at 315-443-3275 or in person at the Syracuse Stage Box Office at 820 E. Genesee St. Discounts are available for groups of 10 or more at 315-443-9844.

Pre- and post-show events during the run of “The Glass Menagerie” include the Opening Night Party on April 4 with live music by jazz pianist Ronnie Leigh; Prologues (moderated discussions with actors) on April 6, 12 and 17; Happy Hour on April 10 featuring wine glass painting with Lydia Design/Johnson Camera; an Actor Talkback following the 7 p.m. show on April 13; and Wednesday @ 1 Lecture on April 23, featuring William Morris (theater instructor at Le Moyne College). These events are free for ticket holders. Visit Syracuse Stage website for more information.

On Saturday, April 26, a special event called Poetry and a Play will feature poems by Emily Dickinson, with Joan Sauro (performer/reader). Tickets are $30 and include both a poetry presentation and a matinee performance of “The Glass Menagerie.” Reservations for individuals can be made online. Reservations for groups of 10 or more can be made by calling 315-443-9844.

In the Syracuse Stage lobby, throughout the run of “The Glass Menagerie,” patrons can view an exhibition presented by Friends of the Rosamond Gifford Zoo at Burnet Park. The exhibition features works by 12 local photographers, winners from this year’s “9th Annual Winter at the Zoo Photo Contest,” an event that Syracuse Stage sponsored.

Williams is widely considered the greatest Southern playwright and one of the greatest playwrights in the history of American drama. Celebrated for tackling tough, taboo subjects, Williams’ plays have been a mainstay at Syracuse Stage. Past productions include “A Streetcar Named Desire” (1977, 2001), “The Glass Menagerie” (1979, 1999), “Cat on a Hot Tin Roof” (1982), “The Rose Tattoo” (1989) and “Moony’s Kid Don’t Cry/Something Unspoken/I Can’t Imagine Tomorrow” (1995).

“With ‘The Glass Menagerie’ especially, Williams pushed the American theater in a new and less realistic direction,” notes Timothy Bond, director and producing artistic director of Syracuse Stage. “His [Williams’] original vision for the play called for projections of words and images, elements rarely if ever used in productions of the play, and for the use of music. For this production, I’ve embraced and have been inspired by Williams’ original vision.”

Williams coined the term “memory play” to describe “The Glass Menagerie” as “dimly lighted, sentimental and not realistic.” For Williams, this allowed for the play to be presented with unusual freedom from convention.

“The tricks memory plays can, like theater, surprise us with the truth,” says Bond. “I know no more fascinating, mysterious, beautiful and challenging theater than the theater of memory, the wellspring of artistic expression. ‘The Glass Menagerie’ is Tennessee Williams’ gorgeous expression of longed-for freedom, wished-for hope, truth, honesty and compassion.”

“The Glass Menagerie” is Williams’ most autobiographical play. Similar to his character of Tom (Tennessee’s real name), Williams grew up under the care of his daughter-of-the-South mother, and he had a younger sister named Rose (Laura’s nickname in the play is Blue Roses.)

Williams’ first major success, “The Glass Menagerie” premiered in Chicago in 1944 and moved to Broadway in 1945. The play has been adapted into two Hollywood movies, three radio productions, two television productions and seven Broadway productions.