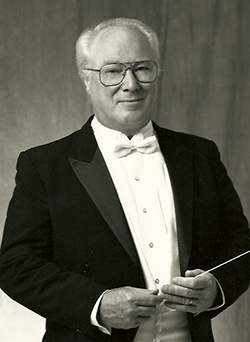 The program will include Holst’s Second Suite in F for Military Band, Ticheli’s “Loch Lomond,” Gould’s “Marches” from Symphony for Band and Bagley’s “National Emblem March.”

Bloomquist joined the MSU faculty in 1970 as director of bands, coming from the University of Kansas, where he held the same position. He was director of the MSU School of Music from 1978-88.

Bloomquist is past president of the American Bandmasters Association and past president of the National Band Association (NBA). He is also a member of the College Band Directors National Association. He has received numerous honors and awards, including the American School Band Directors Association Harding Award, the Phi Mu Alpha Sinfonia Orpheus Award, the NBA Citation of Excellence and induction into the NBA Hall of Fame. In 2004, he was awarded the prestigious Medal of Honor from the Midwest Clinic, an international band and orchestra conference.

The Wind Ensemble is the University’s premiere concert band and is primarily made up of musicians from within the Setnor School, part of the College of Visual and Performing Arts.

For more information about the concert, contact the University Band Office at 315-443-2194 or fmmoore@syr.edu.