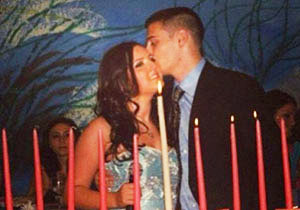 Rob Faugno ’15 plans to run 54 miles in a fund-raiser on behalf of his sister Bartolina.

A Syracuse University junior is lacing up his running shoes for a 54-mile jog, in the name of his sister and an organization that grants wishes to sick children.

Rob Faugno will depart before sunrise on April 11, which is his sister Bartolina’s 18th birthday. Bartolina was in line for a special wish from Make-A-Wish, but declined it. “She said it was for sick kids, and she wasn’t sick,” Faugno says.

Bartolina was born with epilepsy and a tumor on her brain stem. “She graduated high school and is going off to college,” Faugno says. “As someone who has had to deal with a lot of adversity, she’s persevered and tackled every challenge she’s had. On her 18th birthday, I wanted to do something really big.”

The run (at an ultra-marathon distance) will originate at Faugno’s fraternity house, Pi Kappa Alpha. It will finish at the chapter house at Cornell University in Ithaca.

Faugno has a dual major of marketing and entrepreneurship and emerging enterprises in the Whitman School of Management. He’s using his marketing skills to spread the word, encouraging people to pledge their support.

Make-A-Wish has set up a webpage to help in the fund-raising effort (http://friends.wish.org/033-000/page/Robert-Faugno/Run-Rob-Run.htm). His efforts have also generated plenty of media attention too. We’ve curated in a Storify posted below.