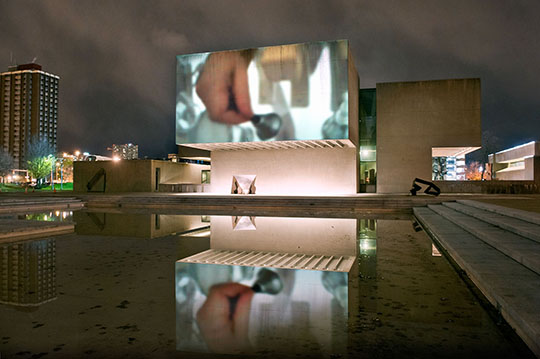 Ann Hamilton’s video piece “table of contents” will begin at the Everson UVP site on April 8.

Hamilton will give a talk in the Everson Museum of Art’s Hosmer Auditorium at 6:30 p.m. A special Tuesday night screening and reception will follow on the plaza.

Both the talk and the reception are free and open to the public. For the most up-to-date information, join the event on Facebook. 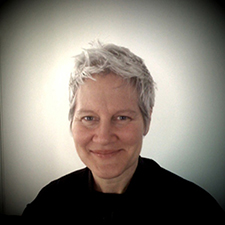 Best known for her large-scale installations, including last year’s enthusiastically received Park Avenue Armory Show, “the event of a thread,” Hamilton has created work for many of the world’s great venues, such as the Guggenheim, Mass MoCA, the Tate Liverpool and the Dia Center for the Arts, and she represented the United States in the 1999 Venice Biennale.

With this installation, Hamilton utilizes the brutalist monumentality of I.M. Pei’s building and the adjoining public plaza as the proscenium stage for a piece about the space of performance—simultaneously public and intimate—and how the audience might occupy that space.

Taking composer David Lang’s notoriously difficult composition, “Table of Contents” as its starting point, Hamilton’s piece poses a series of rhetorical questions to the viewer: Can the weight in the touch of a percussionist’s hand be visualized? How can a recording reveal the many subtle actions that bring forth musical virtuosity? What is the space between hearing and seeing, and how do we—the viewer-hearers—occupy this space?

When he wrote the score for “Table of Contents,” Lang envisioned a nearly impossible synchronization of two percussionists. “My original idea for the piece was a visual image that reminded me of the television variety shows of my youth—someone would come out onstage and make music by picking up an odd array of noise makers, in lightning succession, all of which produced sound in different ways.”

Fellow musicians were incredulous, telling Lang it was too difficult. In 2009, the Pendulum Percussion Duo (Susan Powell and Joseph Krygier) took on the challenge of playing the piece the way he intended. Other duos thought it impossible to pick up the instruments and shake them; until the Pendulum Percussion Duo’s performance, Lang had never witnessed its proper execution.

After seeing their performance in 2011, Hamilton imagined attaching an array of low-resolution mini surveillance cameras to their hands and instruments. This technique builds upon a process specific to her practice since 2001, which uses an inexpensive single-chip miniature surveillance camera held in the hand. The appendage of touch becomes the “eye.” This technique of “handseeing”—reading, recording and in effect rewriting—causes the picture to come in and out of focus. This is the first time Hamilton has used this many cameras simultaneously, undertaking the challenge of synchronizing their multifarious perspectives into one single projection.

In Hamilton’s “table of contents,” the cameras occupy the gap between hearing and seeing. They insert a motion that is neither the percussionist’s hand nor the static unblinking eye of an overhead stationary camera. The spliced video channels generate a counter rhythm, a back-and-forth that possibly brings us intimately into “impossible” virtuosity.

For more information about “Ann Hamilton: table of contents” or UVP, go to http://urbanvideoproject.com.