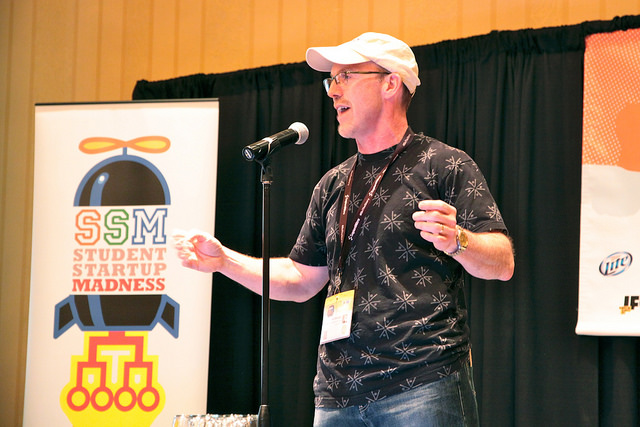 Sean Branagan, director of the Center for Digital Media Entrepreneurship at the Newhouse School and creator of Student Startup Madness, thanks the crowd, judges and sponsors for their support and congratulates the Entrepreneurial Eight teams who made it to the finals at SXSW.

South By Southwest (SXSW) Interactive is the place to be to find out “what’s next” in creative content and digital technologies.

“I always loved the old SXSW tagline: ‘Tomorrow Happens Here,’ and it still feels true,” says Sean Branagan, director of the Center for Digital Media Entrepreneurship at the Newhouse School of Public Communications.

Branagan was one of several people from SU who attended SXSW—the annual conference, trade show and festival in Austin, Texas, in the areas of music, film and interactive, along with education—to either present or pick up on the latest trends in technology and the digital universe.

Branagan also headed to SXSW for the finals of Student Startup Madness (SSM), a collegiate startup tournament that he created. SSM, which is supported by several corporate sponsors and host universities, including SU, allows college student startups to get real-life exposure in front of investors, entrepreneurs and technologists. Teams apply online before they are whittled down in three rounds; eight are chosen for the finals at SXSW.

A startup team founded by two Syracuse University students also made it to the final eight. Sarah Roche G’13 and Nomi Foster G’13, both Newhouse graduates, created Platypus TV in early 2013. The company, which also added Connor Vanderpool, a 2013 graduate of the Rochester Institute of Technology, is a social television platform that time-stamps conversation streams to be played next to television episodes. 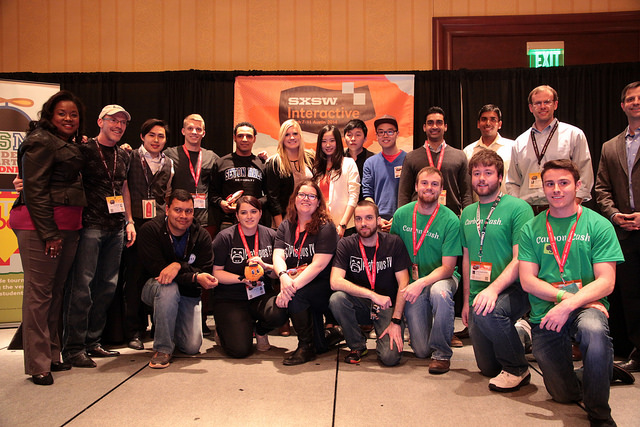 “Where Notefuly had the greatest advantage over the other teams was in traction. They have more than four million downloads and revenue,” Branagan says.

Branagan’s expertise with student entrepreneurs was also tapped for the SXSWedu Conference and Festival at a panel on “Student Startups: The Ultimate Educational Experience.” The panel was organized and facilitated by Kate Brodock, director of the W2O Group Center for Social Commerce at the Newhouse School.

The panel focused on moving student entrepreneurship beyond the traditional classroom and having them implement their ideas as part of the curriculum.

“We all are believers in starting something real—not a science project or student project or learning or talking about it—while still on campus and a student. Real ventures. Real businesses,” says Branagan, who focuses on media and digital media ventures.

Brodock, who is also president of Girls in Tech, a global nonprofit for the empowerment, engagement and education of influential women in technology, also presented on a SXSW panel about “The Ongoing Issue of Funding Women Entrepreneurs.”

In her blog about the event, Brodock discusses the importance of networks for women in seeking capital, the differences in pitching styles between men and women and the need to move from mentorship to the next step of sponsorship.

“Additionally, one big issue is still educating and influencing those in actual funding positions. The venture capital space is still predominantly male, and—with or without thinking about it—many of the biases we see are still being played out,” Brodock says. “Having this industry more aware of this and more supportive of change is a big issue without a clear solution—although there are many conversations happening around the topic, and small-scale efforts to change.”

A key part is involving men in the conversation. “There are many men who are very supportive of females in tech and entrepreneurship, and opening up the conversation and involvement from them is crucial,” she says.

Delving into new technologies, School of Information Studies Assistant Professor of Practice Anthony Rotolo and Isaac Budmen ’12 were invited to speak as part of the SXSW Playground, a special venue focused on emerging “maker” technologies, such as 3D printing and other digital prototyping and fabrication tech. 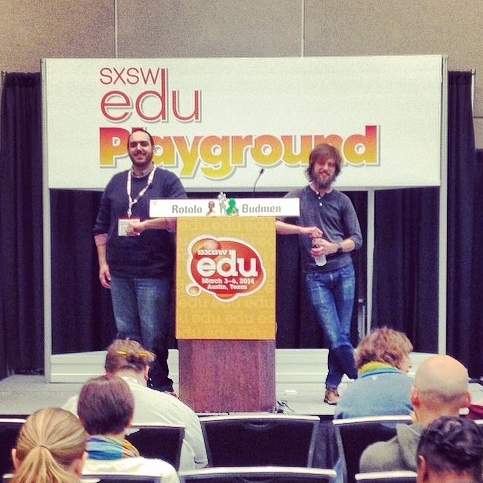 In their SXSWedu presentation, School of Information Studies Assistant Professor of Practice Anthony Rotolo and Isaac Budmen ’12 discuss their book “The Book on 3D Printing.”

In their SXSWedu presentation titled “Adventures in 3D Printing,” Rotolo and Budmen, an expert on the mechanics and digital design aspects of 3D printing, discussed their book “The Book on 3D Printing,” their research and how the technology is used in projects at the New Explorations in Information and Science lab at the iSchool. Budmen is an artist at the Metropolitan Museum in New York City, working with the museum’s Digital Media Lab to advance the use of 3D printing in the creation and restoration of artwork.

The session was the closing talk for the Playground and drew more than 100 people. After the event, the two signed books at the SXSW Bookstore presented by Barnes & Noble.

“We had the chance to share our research and experience with many teachers—the best kind of teachers—who are pushing the limits of the classroom and opening doors for their students to learn for the future,” Rotolo says.

Another faculty presenter at SXSWedu, Newhouse Social Media Professor William Ward, was part of the panel “Is Being Tech-Savvy the New M.B.A.?” about preparing students with the online skills needed in the business world.

Among the SU students who made their way to Austin were Lauryn Botterman ’15, a public relations major, and Nick Jones ’15, a dual political science and public relations major. Both are ambassadors for the Center for Social Commerce, working with Brodock on various projects, and will be summer interns with the W2O Group. They attended as part of the center to experience a pre-SXSW Social Commerce Summit organized by the W2O Group and other activities.

In their blog post, Botterman and Jones highlighted some of the presentations and insights, including tips from Natalie Malaszenko, vice president of marketing and digital strategy for Omni Hotels, who talked about the power that comes with being the first to explore a new idea and taking risks, and Kelly McGinnis, senior vice president and chief communications officer of Levi Strauss, who talked about defining a consistent, relevant narrative to go out on all media platforms.

They also heard compelling information about understanding data from the Social Commerce Summit.

“A key takeaway of W2O’s SXSW events was the importance of analytics in the communications industry,” Botterman says. “It’s crucial that aspiring communications professionals have a keen understanding of how to leverage data-driven insights.”

Jones also saw how data is now being used in a variety of businesses and brands. “Everyone’s favorite brands are using big data and analytics to help understand their customers more and more, and it was interesting to see how they are doing it,” says Jones, who will be learning more about data analytics during his summer W2O Group internship.

For Jones, the atmosphere was just as enjoyable as the learning experience. “I’ve never been to Texas before. and the most memorable part was being able to visit Austin—the personality of the city, how lively it was during the festival and really seeing how people gravitate to tech and how it brings people together,” Jones says.