The School of Education will welcome Rick Lowe, an artist and member of the National Council on the Arts, to speak on Wednesday, March 26, at 4 p.m. in the Public Events Room at 220 Eggers Hall. 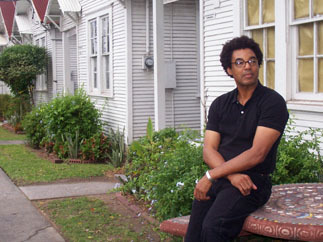 Lowe’s lecture, “Art and the Social and Built Environment,” is part of the Douglas Biklen Landscape of Urban Education Lecture series, and is co-sponsored by 601 Tully: Center for Art and Engaged Research. The event is free and open to the public. CART open captioning services will be provided, and free parking is available in the University Avenue Garage.

This lecture will address a wide range of issues and questions related to socially and community engaged art practice. Lowe will discuss the value and advantages of long-term and short-term projects on both large and small scales. Lowe emphasizes the importance of the symbolic and the practical nature of community-engaged work, and the advantages of artist-initiated projects and institutions, such as museum-commissioned projects. He will talk about Project Row Houses, a 20-year-old neighborhood-size project in Houston, and Trans.lation: Vickery Meadow, a one-year-old project commissioned by the Nasher Sculpture Center in Dallas. On a smaller scale, Lowe will talk about “Brother-N-Law’s” a project with a single community member.

Lowe resides in Houston, and his formal training is in the visual arts. He has participated in national and international art exhibitions and programs since 1995. In 2012, Lowe was an artist in residence at the Community Innovators Lab at the Massachusetts Institute of Technology and Tensta Konsthall in Stockholm, Sweden. Previously, he was a master artist at the Atlantic Center for the Arts in 2011, a visiting artist at the Otis College of Art in Los Angeles in 2010 and a Loeb Fellow at the Harvard Graduate School of Design from 2001 to 2002.

Lowe also serves as a board member of the Menil Foundation. He received the Creative Time’s Leonore Annenberg Prize for Art & Social Justice in 2010, the United States Artists Fellowship in Design in 2009 and the Heinz Award in the Arts and Humanities in 2002. In December 2013, Lowe was appointed as a member of the National Council on the Arts by President Barack Obama.

For more information on the Landscape of Urban Education lectures, visit http://soe.syr.edu/LUE or call 315-443-4696.