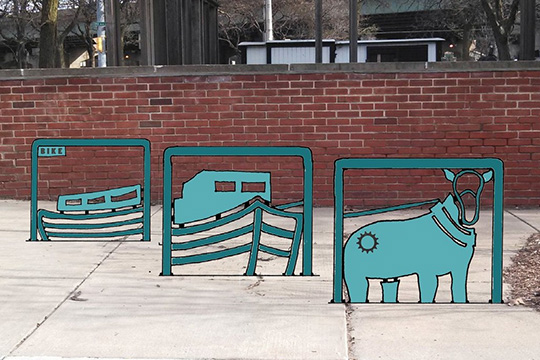 The Connective Corridor has awarded a $10,000 grant to the 40 Below Public Art Taskforce (40B PATF) to fund an artist team to create innovative public art bike racks for the civic strip portion of the corridor.

This is the first in a series of public art solicitations by the Connective Corridor funded through Empire State Development. The competition was a partnership with PATF and open to young emerging artists who are part of 40 Below’s Public Art Taskforce network.

The call was for artist teams to create installations for the civic strip–an area that encompasses Syracuse’s museum and cultural district along South State Street and Montgomery Street from East Adams to East Water streets. Artist teams were asked to submit site-specific designs that addressed the historic and cultural identity of the City of Syracuse, as well as unique local flavor and assets. The winning team also had to demonstrate approval for their project through the City of Syracuse, as well as a maintenance plan for the public art being proposed.

The PATF “Rack Pack” proposal builds on an initiative developed by the group that has already installed three racks: one in the Westcott area, one on North Salina Street and a set at the Milton J. Rubenstein Museum of Science & Technology in Armory Square.

As part of the competition, teams developed multiple designs, received feedback from the larger Rack Pack group and refined final designs for each location, working with the museum directors and property owners.

The Erie Canal Museum bike racks will feature a mule pulling a canal barge, an image across three bicycle racks that will match the color and feel of the museum’s logo. The OHA rack design is inspired by the E.C. Stearns bicycle, known as the “Yellow Fellow” and its first six-person bicycle, which was also known as the “Sextuplet.”  That bike was made famous in a Syracuse race against a steam engine, which the six-person bicycle team won.

The Columbus Circle bike rack, to be located near the Mission Restaurant, will feature a three-set of colorful roosters. A signifier of good luck in many cultures, the roosters are designed to encourage residents and visitors who gather in Columbus Circle for many downtown festivals to celebrate Syracuse’s multi-ethnic mix of cuisine and cultures.

“These racks provide infrastructure for the bicycling community, an artistic outlet for Syracuse’s creative community, and add a fun and interesting element to the streetscape,” says PATF Co-Chair Michael Giannattasio G’12, who received a M.F.A. in sculpture and has been an adjunct instructor in the College of Visual and Performing Arts. “As part of the Connective Corridor, these sculptural bike racks will encourage exercise and the use of a sustainable mode of transportation along the corridor. With the integration of these racks into the streetscape of Syracuse, we not only encourage bicycling, but will also beautify the streets.”

“With the assistance of the Connective Corridor, PATF and 40 Below will continue to encourage artistic projects throughout the City of Syracuse, creating a more interesting and inviting city,” adds PATF Co-Chair Tommy Lincoln G’05, a former adjunct instructor in the S.I. Newhouse School of Public Communications.

“The corridor is building Syracuse’s first green bike pathway and this public art project helps celebrate the city’s rich bicycle history,” says Linda Dickerson Hartsock, who directs the Connective Corridor for SU’s Office of Community Engagement and Economic Development.  “Syracuse was once a bicycle hub known round the world, with many famous early bike and motor-bike manufacturing companies located here. At its height in the 1890s, E.C. Stearns employed 2,000 and made 500 bicycles a day, with the number of bicycle riders in Syracuse totaling 10,000 during that era. It’s great to see a renewed interest in creating a bike culture here, and we’re happy to be working with talented young leaders, many of whom are Orange CNY alumni, who are the city’s next generation of creative makers and fabricators.”