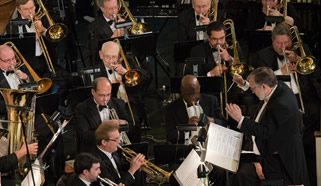 “We’re excited to return to the Capitol Theatre for what is the highlight of our spring run,” says Spencer, who also arranges for and plays with the group. “The concert is a virtual time capsule, allowing people to relive the sights and sounds of a bygone era. There’s something here for everyone.”

Rounding out the afternoon will be a variety of music-hall numbers, an audience sing-along, a fully staged scene from the play “On Trial” and several short films.

“I can’t think of a better venue in which to present this program,” says Spencer, also a Meredith Professor of chemistry and an associate dean in The College of Arts and Sciences. “With its full-size stage and orchestra pit, the Capitol is a gem among movie houses in central and upstate New York. Playing there is like being transported back in time.” 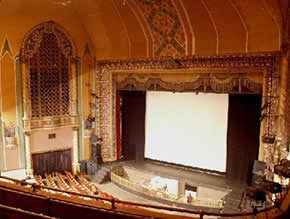 The Capitol opened in 1928 as an opulent first-run movie theater and was the first in the area to play “talkies.” Citing high overhead costs, the theater closed in 1974 but reopened more than a decade later as a performing arts center. Today, the 1,788-seat venue is home to more than a hundred events a year. Amenities include a 20- by 40-foot movie screen and the original-installation theater organ.

Upcoming SUBE concerts include those on Thursday, April 7, at 7 p.m. in SU’s Hendricks Chapel, as part of the CNY Brass Festival; Saturday, May 3, at 7 p.m. at Holy Cross Academy (4020 Barrington Hill, Oneida); and Thursday, July 3, at 7 p.m. at Emerson Park (6914 East Lake Rd., Auburn), as part of that city’s annual patriotic celebration. All events are free and open to the public.

SUBE features more than 30 professional and amateur musicians from Central New York. In addition to performing at official SU functions, SUBE presents 15-18 public concerts a year, including the award-winning “Holidays at Hendricks,” which is broadcast on WCNY TV and radio throughout New York state and southern Canada. Distinguished composers from whom SUBE has commissioned music include Robert Ward, Arthur Frackenpohl and Joseph Downing. DVDs of the ensemble are available at the SU Bookstore.