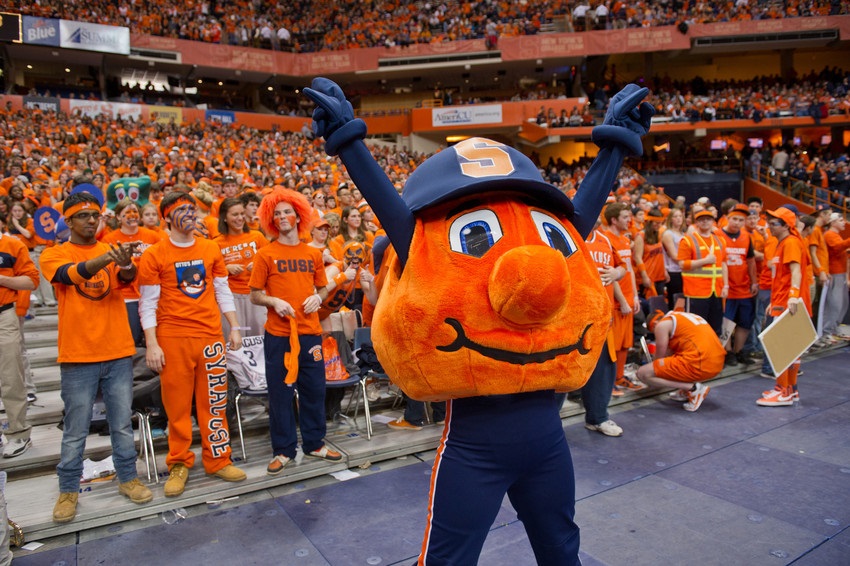 Otto the Orange was named No. 1 among NCAA Tournament mascots by Sports Illustrated.

As Syracuse University fans await the start of the NCAA Tournament, one Syracuse competitor has already claimed victory.

SU’s own charming and spirited Otto the Orange was named the No. 1 Mascot of the NCAA Tournament by Sports Illustrated.

Sports Illustrated explained its pick, stating, “An NCAA tournament just doesn’t feel right without Otto. This little round mound of joy has the benefit of A) looking like a basketball B) staying super small and compact, so the costume can fit into overhead compartments and C) being a gosh-darned orange wearing sweatpants.”

The magazine looked at the hard-working mascots’ “distinctiveness, quirk and enthusiasm” to name its Sweet 16. Otto beat out such tough opponents as the Blue Devil (Duke), Sparty (Michigan State), Puddles (Oregon) and The Tree (Stanford).

Being the Orange is no small job—Otto is a team effort in its many appearances at sporting, campus and community events. According to University Archives, “the warm and wooly interior of Otto’s costume is inhabited sequentially in any one year by from two to six students who audition for the honor of entertaining SU fans.”

Take a look at the culture of Otto.