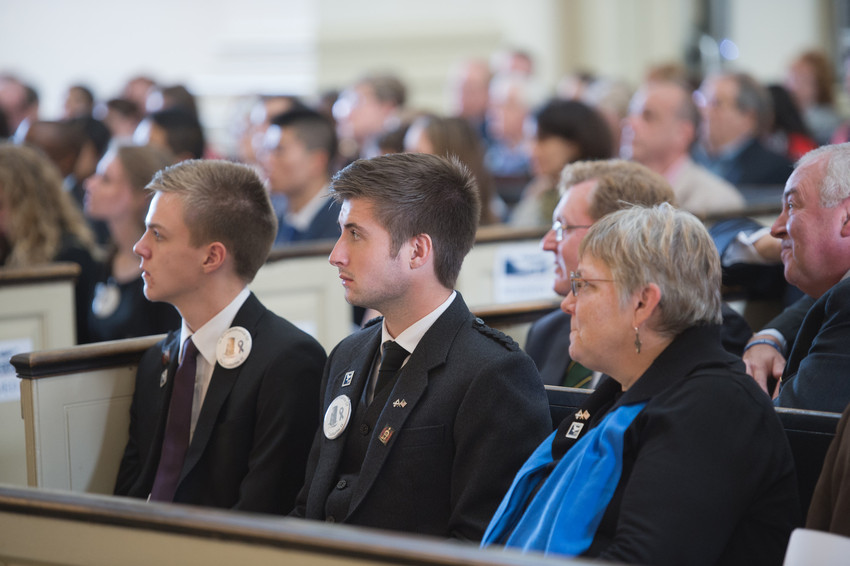 Syracuse-Lockerbie Scholars Callum Johnstone and Fergus Barrie are pictured with Judy O’Rourke, SU’s director of undergraduate studies, during the 2013 Convocation for Remembrance Scholars in Hendricks Chapel. Johnstone is a 2013-14 Scholar; Barrie was a 2011-12 Scholar who is now a junior in the Falk College of Sport and Human Dynamics.

The government of the United Kingdom will give £100,000 in funding to the Lockerbie Trust, a Scottish charity that supports the Lockerbie Scholars chosen annually to study at Syracuse University. George Osborne, the United Kingdom’s Chancellor of the Exchequer, made the announcement during his 2014 budget speech, given March 19 in London.

The government of Scotland pledged £60,000 to the charity in December 2013, at the time of the 25th anniversary of the Pan Am 103 tragedy. The total of the British and Scottish funding is approximately $264,000.

“This announcement is wonderful news, and is affirmation of the importance of the Syracuse-Lockerbie Scholars program,” says Kelly Rodoski, chair of Syracuse University’s Pan Am 103 25th Anniversary Committee. “This funding from the British government, together with the pledge from the Scottish government, will help ensure that this program remains strong and vibrant in the years to come, and that we will continue to draw lessons from this tragedy through this Syracuse-Lockerbie connection.”

Pan Am Flight 103 exploded over Lockerbie, Scotland, on Dec. 21, 1988, killing 270 people, including 35 students studying abroad through SU. In the aftermath of the terrorist bombing, SU, as an institution, promised not to forget the students lost, particularly through teaching and learning so that tragedies like Pan Am 103 would not be repeated.

SU is also the home of the Pan Am 103/Lockerbie Air Disaster Archives, the most comprehensive center of research and scholarship available on the tragedy.

Each year, two students from Lockerbie, Scotland, study at Syracuse for one year as Syracuse-Lockerbie Scholars. The scholarships are jointly funded by SU and the Lockerbie Trust.

Since the first scholars arrived on the Syracuse University campus in the fall of 1990, 48 scholars have served as Scottish ambassadors at SU, and have returned home with ties binding them to Syracuse University and Central New York. The 2014-15 Syracuse-Lockerbie Scholars, Will Beech and Megan Noble, were recently announced. Two Lockerbie Scholars currently on campus are Fergus Barrie and Callum Johnstone.

The Syracuse-Lockerbie Scholarships provide proof of the close bonds that have formed between Syracuse and Lockerbie, as well as the strong desire to remember and to learn.

“I’ve studied Mandarin in Beijing, hiked into a Naxi village and worked for the US-DPRK Scientific Engagement Consortium, but nothing opened the world to me like meeting Allison Donaldson, a 2010-11 Lockerbie Scholar,” says Molly Linhorst, a 2013-14 Remembrance Scholar at SU. “We became close friends, joining the transatlantic community woven from the torn threads of a heartless act of violence. We both grew up hearing about the unique union of our hometowns. It wasn’t until I met Alli, however, that I understood the power of this union, bringing together two teens eager to understand the world.”