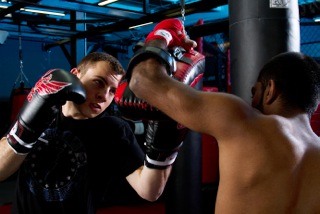 Daniel Goldberg created Golden Gear while a student at SU.

Goldberg started the company while in  pursuit of gear that would better protect him from injury. While training for competition, Goldberg injured his shin, then his wrist, then earned 14 stitches above his eye, all due to gear issues. He began purchasing gear wholesale from a manufacturer and reselling it to gyms near his hometown of Long Island.

Soon he began developing his own line of gear. After meeting with fighters and partnering with a Long Island hand surgeon, Goldberg has created his ReAktion Series, a more protective glove with a patent-pending closure system.

In the fall of 2013, Goldberg won $500 in an IDEA Juicer competition, and he is competing in the RvD IDEA Awards and Panasci Business Plan Competition at Emerging Talk next month for additional seed funding.

Golden Gear has doubled its sales in the last year to more than $100,000 and plans continued growth while Goldberg earns a degree from Syracuse University.