Making an Impact for Children’s Education

Aysha A. Seedat ’16 has always been interested in public policy and politics but it was the required first-year writing course that decided her future. 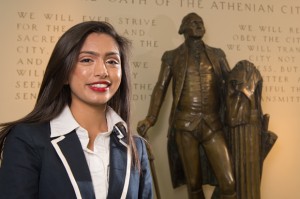 Her selected course topic, Issues in Public Education, led her to consider the state of education and how educational policies and practices are failing students. “That course immediately struck my interest in public education,” Seedat says.

A policy studies major in The College of Arts and Sciences and the Maxwell School from Fair Lawn, N.J., Seedat has focused her interest in education, taking a course in the School of Education and recently participating as a panelist at the seventh annual Conference on Equity and Social Justice. The conference was held March 1 on campus and hosted by the School of Education.

Seedat addressed standardized testing, teacher accountability and how those impact children and their education. “I don’t believe that test scores are an accurate representation of a child’s growth knowledge in the classroom,” Seedat says. “People learn differently and bubbling in a circle isn’t going to capture that at all, in my opinion.”

“Districts don’t want to put people in classrooms to evaluate teachers’ performance; they just want to give kids a test and that will reflect on the teacher,” Seedat says. “Teachers then teach to the test, and you can’t necessarily blame them.”

Seedat’s eventual plans are to work at the federal level on education policy, where she hopes to continue the message that standardized testing causes problems on many levels. The skills she’s learned in such courses as “Introduction to Analysis of Public Policy” with Professor William Coplin will be necessary to her field, such as being succinct in one’s points.

“He addresses the truth, and the way he approaches the teaching the material is very straightforward,” Seedat says. “The most fascinating part of policy studies is how you can use it in many aspects and how it can be interpreted.”

Seedat has also taken her interest in the public good to the Student Association. She began assisting two of her friends, Boris J. Gresely ’15 and Daniela López ’15 (now SA president and vice president, respectively), last semester with their campaign, and applied for a cabinet position after the election.

Once she was appointed director of student life in SA’s 58th session, her first order of business was to book the shuttles that bring students to the transportation hubs for spring break and also the bi-weekly shuttles to Wegmans and Target. But she wants to have a deeper understanding about the various services provided to students and their impact.

“I made it a huge point to survey students using the shuttles to get a number as to how many people are using them to make sure money is being spent wisely,” Seedat says. First-year students enjoy the service, but some have suggested ideas, such as a bus to Wal-Mart, which would need to be studied.

Seedat and her committee are working on several other initiatives, including increasing the interaction of transfer students on Main Campus and helping them to better integrate; working with other campus offices to offer more transportation opportunities for students who work or volunteer off campus; helping promote new ways to increase donations to the Hendricks Chapel food pantry available to students; and increasing student recycling.

Seedat also hears about students’ concerns and challenges as a member of OrangeSeeds, a leadership empowerment program in which upperclass students work with first-year students to help them get involved on campus.

“It emphasizes community service, which is something that I’m a huge advocate for, and opens the eyes of the students,” Seedat says.

Seedat works with more first-year students through her administrative internship in the Office of Multicultural Affairs. She assists with the Wellslink program, which pairs academic consultants and peer leaders with first-year students of color to help increase retention rates.

“I work with students to formulate an action plan to help them perform the best academically they possibly can,” says Seedat, who had her own consultant and peer leader her first year. “My peer advisor showed me the diversity and the resources available to students. When you have a strong support system, that’s what’s going to keep you engaged, and it’s going to keep you coming back.”

The internship fits with her education policy goals. “When you look at a child’s performance in the classroom, a lot more goes into it than just the child and teacher—there are the resources that are available, support systems, parent interaction, race, ethnicity, religion—all of that should get taken into account,” she says.