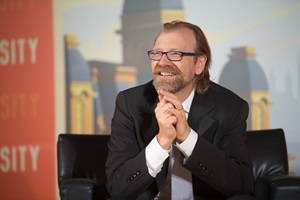 This spring is shaping up to be another busy one for George Saunders G’88, acclaimed author and professor of English in The College of Arts and Sciences.

This past weekend, the Oneonta, N.Y., resident traveled to London to receive the inaugural Folio Prize, open to English-language fiction writers who published a book last year in Great Britain. A few days earlier in New York City, he picked up the Story Prize, honoring the author of an outstanding book of short fiction.

The awards are the latest for Saunders, 55, whose short-story collection “Tenth of December” (Random House, 2013) shot to the top of The New York Times bestseller list a year ago.

“Saunders’ stories are both artful and profound. Darkly playful, they take us to the edge of some of the most difficult questions of our time and force us to consider what lies behind and beyond them,” writes Folio judge Lavinia Greenlaw. “Unflinching, delightful, adventurous, compassionate, he is a true original whose work is absolutely of the moment.”

Saunders’ other recent honors include the PEN/Malamud Award for Excellence in the Short Story and the George Arents Award (SU’s highest alumni honor). He also was a finalist for the 2013 National Book Award. 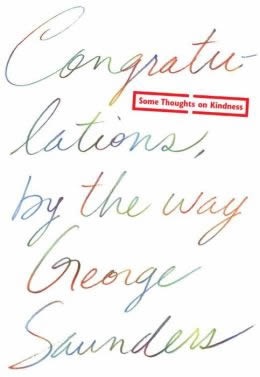 Saunders’ forthcoming book, “Congratulations, By the Way: Some Thoughts on Kindness” (Random House), is due out April 22.

After being called out by Time magazine as one of the world’s 100 most influential people, Saunders delivered a heartfelt speech, last spring, to graduates of The College of Arts and Sciences. The address was eventually picked by The New York Times, where it went viral and earned him a guest-spot on “Good Morning America.” The speech is the basis for Saunders’ forthcoming book, “Congratulations, By the Way: Some Thoughts on Kindness” (Random House), due out April 22.

“What I regret most in my life are failures of kindness,” writes Saunders, who is being featured next month on “CBS News Sunday Morning.” “Those moments, when another human being was there, in front of me, suffering, and I responded … sensibly. Reservedly. Mildly.”

George M. Langford, dean of The College of Arts and Sciences, calls Saunders one of the most audacious voices in American literature. “He’s a humorist virtually without peer,” Langford says. “George’s writing is powerful, funny and honest. He inspires all of us to examine our behavior and to lead kinder, more fulfilling lives.”

Saunders is the author of six books of fiction (mostly short-story collections and novellas), including “In Persuasion Nation” (Riverhead Books, 2006), “Pastoralia” (Riverhead, 2000) and “CivilWarLand in Bad Decline” (Random House, 1996). He also is an accomplished nonfiction writer, as evidenced by his two collections of essays and his long-form pieces for Esquire and GQ magazines. His writing frequently appears in The New Yorker, Harper’s and McSweeney’s magazines.

Saunders’ hardware includes four National Magazine awards and the O. Henry Award. He also was named a Guggenheim and MacArthur fellow, within months of each other, in 2005-06.