Masterclass Postponed Due to Weather 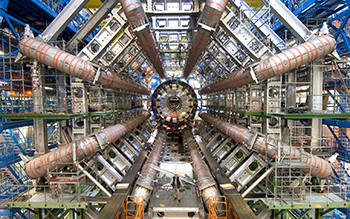 (Editors note: this event was postponed due to weather.)

More than 20 local high school students have been invited to participate in an international masterclass on particle physics in The College of Arts and Sciences. The event, which is Wednesday, March 12, will enable them to analyze data from the Large Hadron Collider (LHC), the world’s largest, most powerful particle accelerator, located at the European Organization for Nuclear Research, or CERN, in Geneva, Switzerland.

The event marks the first time SU’s Department of Physics has participated in an international masterclass, which takes place every spring at institutions all over the world. SU’s masterclass will coincide with a similar one at the University of Cincinnati.

“This hands-on event provides high school students with a rare glimpse of how modern particle physics experiments work,” says Associate Professor Steven Blusk, who is co-organizing the event with Assistant Professor Mitchell Soderberg. Both professors serve on the physics faculty and belong to SU’s High Experimental Energy Physics Group, which is leading the masterclass.

According to Blusk, students will examine “real data events” that have been recorded at the LHC. Not only will they be challenged to find evidence of subatomic particles (specifically, ones that disintegrate within 0.0000000000002 seconds), but they will also perform statistical analyses of larger data samples. “Studies of these particles could lead to a deeper understanding of why we live in a matter-dominated universe,” he says.

Soderberg adds that working with such data can be challenging and rewarding. “For most participants, it’s a once-in-a-lifetime opportunity,” he says.

Students will round out the day by participating in international videoconferences with their peers.

The SU masterclass comes on the heels of the release of Mark Levinson’s critically acclaimed documentary “Particle Fever,” much of which takes place at CERN and deals with the search for the Higgs boson, believed by physicists to hold the key to understanding the universe.

More than 15 researchers from SU, including Blusk and Soderberg, are part of a global team of scientists at CERN—and the Fermilab laboratory in suburban Chicago—that has been searching for evidence of new forces and particles. Their research is supported by the National Science Foundation (NSF).

“It’s exciting to share this kind of research with high school students and their teachers,” says Soderberg, adding that participants were hand-picked from Fayetteville-Manlius High School, Liverpool High School and Port Byron Senior High School. “Who knows, maybe some of them will be inspired to major in physics in college.”

International masterclasses are led by Technical University Dresden and QuarkNet, in close cooperation with the International Particle Physics Outreach Group (IPPOG). IPPOG is an independent group of outreach representatives from countries involved in the research at leading laboratories worldwide. QuarkNet is a U.S. teacher professional development program, supported by NSF and the U.S. Department of Energy.