Newman, Taylor to Lead Class of 2015 as Senior Class Marshals

Newman and Taylor will have the unique opportunity to participate in the following experiences as part of this honor:

“This year’s applicant pool was outstanding,” says Sylvia Langford, associate vice president for student affairs and chair of the selection committee. “The committee’s task was not only rewarding and inspiring, but also challenging. It is an honor to serve on this selection committee.”

Senior class marshals are among the most prestigious honors at SU. They are distinguished individuals who have excelled during their time on campus and who exemplify the spirit of the senior class. The criteria used to determine qualified nominees include scholarship, academic honors, student organization involvement, campus service and community service. An essay and a copy of an official SU transcript are also required. 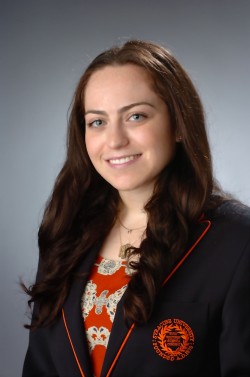 Newman, a native of Monmouth County, N.J., is a Chancellor’s Scholar and member of the Renée Crown University Honors program. She is a dual major studying political science and policy studies within The College of Arts and Sciences and the Maxwell School, with a strategic management minor in the Whitman School of Management, and has received dean’s list honors. Newman has been inducted into the Order of Omega Honor Society and the Pi Sigma Alpha Political Science Honor Society. During her senior year, she will serve as president of SU’s Panhellenic Council.

As an active member of SU’s Student Philanthropy Council, Newman seeks to promote philanthropic engagement on campus, and is currently serving as a member of its succession committee. She is a member of Alpha Epsilon Phi Sorority, Iota Chapter, and has held several leadership positions.

For the second year in a row, she is serving as co-chair of the campus-wide SU White Ribbon Campaign in coordination with local domestic violence organization Vera House. In addition to her on-campus activism, Newman founded the “Justice for Heather Coalition,” a domestic violence movement focused on raising awareness and legal reform in New Jersey, following a family tragedy. In the fall of 2012, she worked to secure the passage of Senate Bill 331 “Heather’s Law” in the New Jersey State Legislature, and spoke alongside New Jersey state senators at a press conference on these issues.

Another area where Newman has flourished on campus is in her work with Professor William Coplin, director of the public affairs department. Newman serves as a co-teacher with Coplin for his “SkillsWin!” Honors Course. Together, they developed the course based on his recently published “SkillsWin! Playbook,” which provides a program through which college students can enhance their skills.

“Syracuse University has been a place where I have enjoyed myself to the fullest; indulged in inspiring, intellectual conversations; and most importantly for me, have been able to analyze where there are problems in our world and explore what we can do to efficiently and feasibly solve them to create a better community moving forward,” says Newman.

“I wholeheartedly believe that my college experiences were only possible due to the unconditional support I have received on this campus, as well as the truly special opportunities that one can take advantage of here,” she says. “For me to have the role as class marshal is not only a humbling honor, but a culminating point in my time here at SU. It allows me to spend my senior year doing what I love to do: making changes for the betterment of our community that will have a positive and lasting impact.” 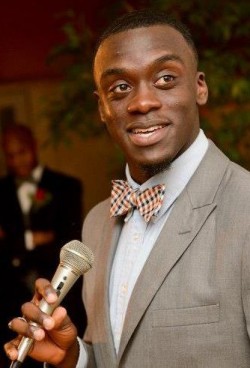 Taylor, a native from Hempstead, N.Y., is a Coronat Scholar, Renée Crown Honors scholar, and member of the dean’s list. He is a dual major studying political science and policy studies within The College of Arts and Sciences and the Maxwell School.

Taylor is the former president and current vice president of the Syracuse Chapter of the NAACP, chaplain of the Delta Zeta chapter of the Alpha Phi Alpha Fraternity, an active member of the Black Celestial Choral Ensemble and previous chair of the Multicultural Empowerment Network. A student activist, Taylor founded the “Healing the Scars” initiative and organized a panel last spring to discuss diversity and inclusion on campus. In 2013, he received the Chancellor’s Award for Public Engagement and Scholarship.

Taylor is also the founder and president of the Cultural Project Rejuvenation mentorship program at Wilson Park in Syracuse, and a “Go to High School, Go to College” mentor. The program is geared toward giving young African American and Latino men in the city of Syracuse a space to develop inter-personal, career and leadership skills at no cost. One of the major initiatives piloted was the “Tie Drive,” which involved each student learning how to tie a tie, as well as them receiving two of their own.

In 2003, Taylor was awarded the 2013 Newman Civic Fellowship to recognize his commitment to civic engagement. This semester, Taylor is a teaching intern working with 12th graders in New York City’s High School for Leadership and Public Service.

“This honor is not only a testament to what hard work, determination and endurance can bring you, it is also a dedication,” says Taylor. “The class marshal is the physical representation of the belief that every individual has the ability to be whatever they set their mind to, despite who may say what you can’t achieve. I speak as an African American male, whom many have deemed as a lost cause, and intentionally give voice to the ideals of black excellence. This opportunity is the means to change the idea of what people that look like me can do and become.”