NBC Interns Make the Most Out of Their Sochi Olympics Experience 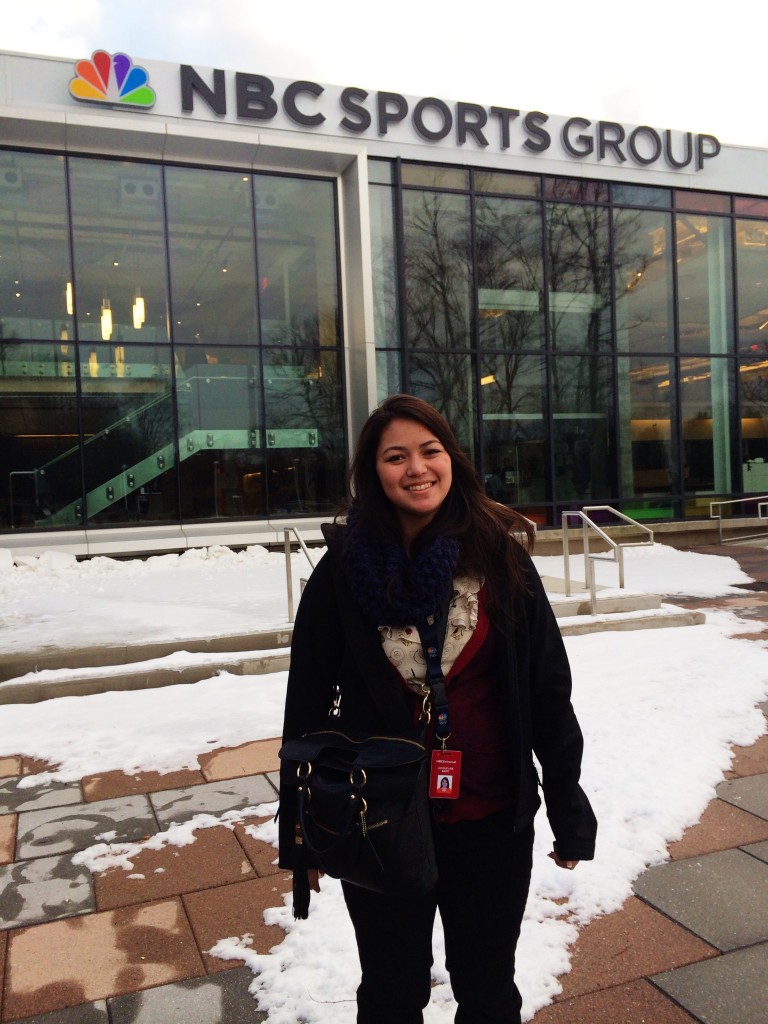 Jackie Barr ’15 stands outside the NBC Sports Group headquarters in Connecticut, where she interned as part of the network’s team working on the Sochi Olympics.

Jackie Barr ’15 was glued to the coverage of the Sochi Olympics.

It was part of her responsibilities during her internship as a shot selector for NBC Sports to pull out unique or newsworthy content, along with specific footage such as U.S. competitors, which would be compiled by the video editors for the millions of online viewers.

“One of the cool parts was that the footage that we pulled was being used and uploaded in a very rapid workflow,” Barr says. “You could often see footage from sports that we worked on appearing on the NBC Olympics website the same day.”

Watching the competitions in real time with true sports fans among her fellow interns and the NBC staff made the experience even more exciting. “The Russia vs. USA hockey game was crazy, to say the least,” Barr says. (The United States claimed a dramatic 3-2 victory in overtime.)

Barr was one of 33 Newhouse School of Public Communications students who interned with the massive NBC Sports operations that brought the Sochi Olympics to American viewers in television broadcasts and online.

Twenty-three students worked in Sochi with NBC, and 10 students, including Barr, were stationed at the network’s sports operations facility in Stamford, Conn. Since the 2004 Athens games, large groups of SU students have been interning with NBC at the Olympics, working in the venues, production studios and remote trucks as loggers, runners and production assistants.

Some students have returned to campus and others are in London as part of an intensive eight-week SU Abroad program following the Olympic internship.

As a script production associate for NBC Sports Network’s live daily broadcast, Cassie B. DiLaura ’15 worked with the show’s format and scripts to maintain the workflow among the control room and studio management.

Her day started at 9 a.m., when she would print and distribute the day’s format—the layout of the show from start to finish, including commercial breaks. Next was the daily production meeting, headed by executive producer Sam Flood, an Emmy Award winner who oversees major sports events for the NBC Sports Network.

“Before our live show would begin, I was responsible for printing out the scripts for the first segment once the writers finalized them and gave me the OK,” says DiLaura, a broadcast and digital journalism major. “I would deliver them to Sam and Peter Lion [the director] in the control room, as well as the graphics production assistant, the technical director and those in central ingest where the feeds come in.” 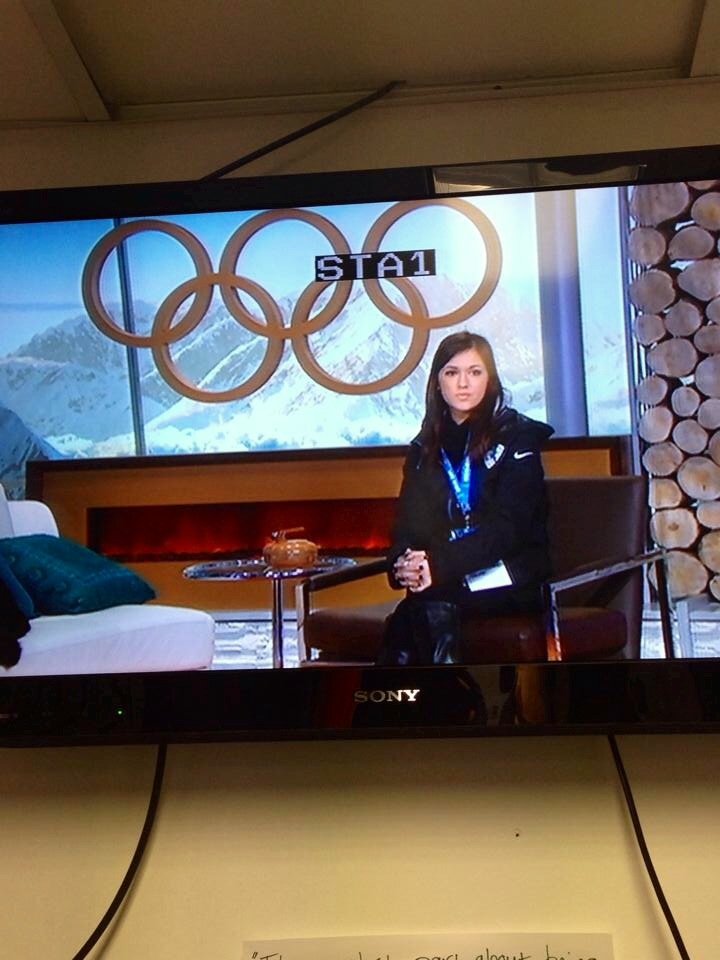 Cassie B. DiLaura ’15 sits in place of on-air talent during rehearsals for NBC Sports Olympics coverage.

During the show, DiLaura was in constant communication through a headset with the director, producer and writers and monitored changes to the script and format.

“One of the most exciting parts about being the script PA was the adrenaline rush while delivering scripts that were changed with less than a minute to go until we were on air,” DiLaura says.

DiLaura had to make sure she was also communicating any changes to the show’s format with the stage manager, who oversees the talent on set, which on her shift included sportscasters Rebecca Lowe, Dan Patrick, Jimmy Roberts and Al Michaels.

During rehearsals the first week in Sochi, she also had a memorable experience camera blocking—sitting in for talent during a two-way shot with Al Trautwig and Chad Salmela, who were in the Mountain Cluster.

As an aspiring on-air talent, DiLaura soaked up the experiences with the producers, directors and writers, and with the sportscasters, especially Lowe. “Watching Rebecca rehearse, as well as being live on-air, taught me more than I could have ever imagined about pacing, pronunciation and being able to improvise,” says DiLaura, who was able to spend time talking with Lowe about the field.

Barr, a dual major in public relations in the Newhouse School and in information management in the School of Information Studies, valued learning about the Olympics in depth and working with the NBC staff members, some of whom had been with the network for the last 10 games or more.

“We would be assigned different sports on a daily basis so we would often come into work, learn how the sport was played and read research briefs and about the key competitors before watching the event,” she says.

As a dual major in the iSchool, Barr appreciated learning about the IT infrastructure, the types of software used and the hardware that delivered the footage to the NBC Sports headquarters. 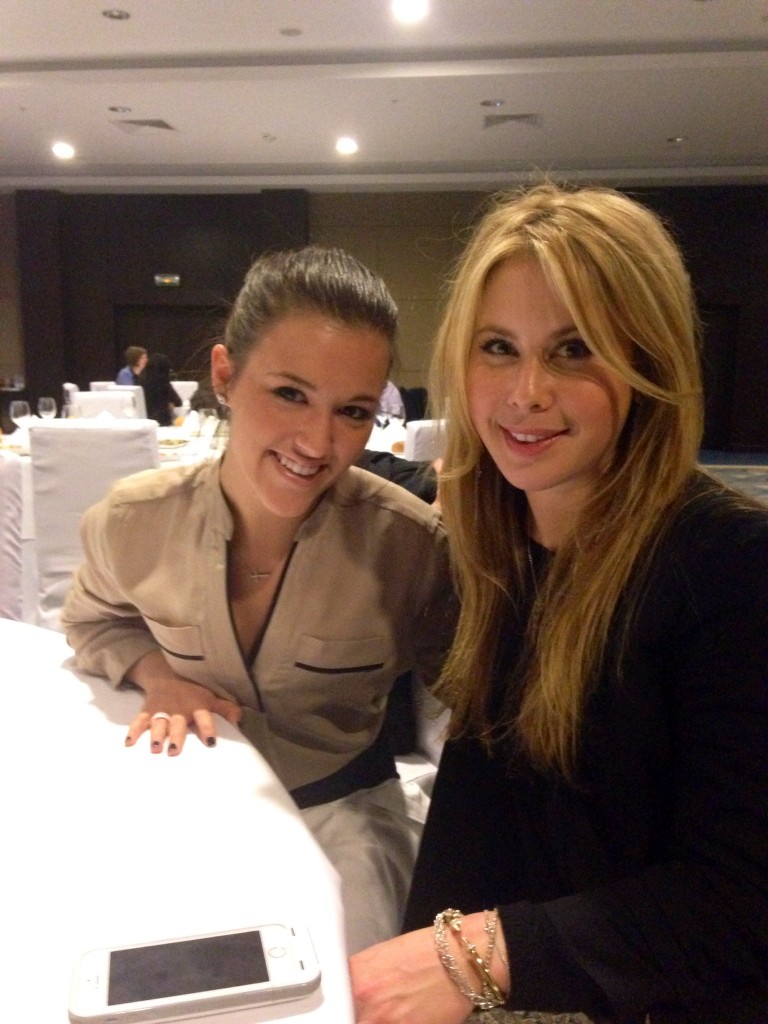 DiLaura meets with Olympic figure skater Tara Lipinski, who won gold in the 1998 Olympics and was part of the Sochi figure skating commentary team.

“NBC rents bandwidth from a tube that goes under the ocean,” Barr says. “The footage is first delivered in low resolution. Only the portions of the footage that need to be used are delivered in high resolution, which saves the company huge amounts of money in overhead costs.”

Although consumed with the work of the internship, both Barr and DiLaura were able to enjoy the Olympic experience. Figure skating is their favorite.

“The energy in the dome was absolutely incredible when the Russian figure skaters competed,” DiLaura says.

This year’s story lines in figure skating—Ashley Wagner’s contended spot on the team, Jason Brown’s routine from the Worlds competition and the ice dancing rivalry between the top U.S. and Canadian teams—added more drama. “This year’s team competition—a new event this year—made it even better with singles, pairs and ice dancing all rolled into one,” Barr says.