There’s a theory that this is a community service-minded, let’s change-the-world-generation.  Centscere, an SU student start-up, is teaming with the Connective Corridor and the Central New York Community Foundation (CNYCF) to put this theory into action by launching a joint project to build civic engagement and philanthropy in Syracuse. 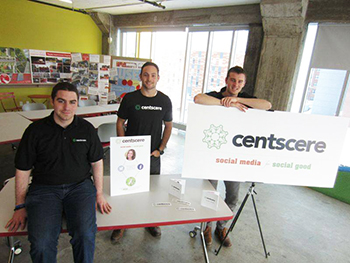 Geared to Millennial/Gen Y and Gen X groups who may just be starting to think about giving, the project combines the power of social networks and the new trend of micro-giving—literally pennies, nickels, dimes and quarters—that add up to meaningful donations for community projects. The campaign also targets students to help them think about “paying it forward” and seeing how communities are created—in both the virtual and physical worlds.

Centscere is gaining regional and national attention in publications like the Huffington Post for its unique approach to social entrepreneurship. This new partnership now shines the spotlight at the local level, through a new Syracuse Beautification Fund.

Recently established as an endowed fund at the CNYCF, the project will help maintain and beautify public parks and public spaces along the corridor, a 2.5-mile stretch connecting the University Hill to downtown Syracuse. The Connective Corridor is a partnership between Syracuse University, the City of Syracuse and Onondaga County, and is part of SU’s Office of Community Engagement and Economic Development.

The Connective Corridor and CNYCF are teaming with Centscere to roll out a micro-giving platform developed by company founders Mike Smith ’12, G’13, Ian Dickerson ’12, G’13 and Frank Taylor ’13, G’14. The company grew out of the Syracuse Sandbox, part of the Raymond von Dran Innovation and Disruptive Entrepreneurship Accelerator (RvD IDEA) hosted at the Syracuse Tech Garden, where it has already received a social enterprise award. The company is a finalist for the Syracuse Startup Labs competition, which includes $150,000 in funding and a marketing and branding package worth $50,000. The results of that competition will be announced in April.

Centscere (a play on the word “sincere”) is an easy way to engage in charitable giving through everyday actions on social media. Once signed up through Centscere, individuals can designate the charity they would like to support, and select an amount to be given to that charity each time they use social media, such as posting an entry or commenting on Facebook, “liking” a Facebook post or sending a tweet.

Enrolling in the service is free, and users can designate the amount they wish to donate for each social media transaction. Users are charged each time they reach a $7.99 threshold, and donations are issued to charities every eight weeks. Ninety-five percent of the donations collected are distributed to charities.

The Syracuse Beautification Fund is one of approximately 75 global charities currently listed with Centscere as potential beneficiaries. The objective of the initiative with the Connective Corridor and CNYCF is to focus on enhancing the local community. For instance, last year’s corridor beautification efforts included planting hundreds of tulip bulbs and maintaining public spaces, such as Forman Park, providing important services that the City of Syracuse does not provide.

For Smith, Dickerson and Taylor, Centscere’s partners, building the platform has been both an entrepreneurial journey and a labor of love, mixing the skills, knowledge and experience they have gained through their studies at SU with the strong sense of giving back that each possesses. The company is a tangible demonstration of their own volunteer work and commitment to building community by “giving back.”

Smith, a native of Paramus, N.J., and Dickerson, a native of Orange County, Calif., were both Kauffman Entrepreneurship Engagement Fellows and came together in late 2012 to begin building the platform. Dickerson ran track with Taylor, a current graduate student in the S.I. Newhouse School of Public Communications, who soon joined the team, bringing his skills in communications.

To help build the concept into a marketable brand, they raised $30,000 from family and friends and have relied on the generosity of other Syracuse companies and firms for accounting, legal and marketing advice, as well as a local advisory team.

That process taught them a lot about the generosity of the local community, and pairing with the CNYCF and the Connective Corridor to encourage community giving was a natural next step. Developing a platform for charitable giving grew out of their philosophy that generosity is a learned trait and that it is possible to develop charitable values through small shared activities like social media.

It was also a way to convey the message that students are part of a larger community, and that by engaging in giving, even at the micro scale, you make your community and the world a better place. What better way to test that than in your own backyard, at the local level?

Dickerson says it was a habit for him to collect change over the years, and that provoked questions, such as how they could transform this kind of everyday behavior into good for a charity of one’s choosing. And while a giving a dime here or a quarter there may not seem like a lot, small amounts add up to a big impact, they say. “This makes everyday actions into charitable moments,” says Dickerson.

Adds Taylor, “And it gives some meaning to the idea that small change adds up to making big differences.”

Smith says the platform offers big benefits for the charities too. “A lot of it is about relationship building and nurturing those relationships,” he says.

“This is a wonderful way to introduce the next generation to charitable giving,” says Linda Hartsock, director of the Connective Corridor, who also chairs the CNYCF board and is on the RvD IDEA board. Hartsock knew Centscere from their early Student Sandbox days at the Tech Garden and valued their commitment to both entrepreneurship and civic engagement. “Our collaboration with Centscere is a natural fit,” she says. “The Syracuse Beautification Fund is an easy way students can show civic pride and express a connection to the community. It is also a tangible way for them to make the place they are working, studying and living more beautiful. Centscere is a powerful new tool to take the concept of loose change to the next level, helping make philanthropic giving a charitable value to take through life.”

Smith, Dickerson and Taylor all agree that their focus is not to build a billion-dollar company, but build a successful one that, at the same time, makes a positive impact on the world, both locally and globally.

“If we can provide a meal, plant a tree or make an impact, then we have done something good,” says Smith.