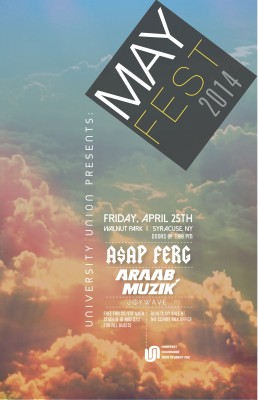 Entry is free for Syracuse University and SUNY ESF undergraduates. Graduate students and guest tickets will be available for $22 and can be purchased at the Schine Student Center Box Office. Limited tickets are available.

araabMUZIK, born Abraham Orellana, is known for his unique hip hop and trance style of production. In 2011, araabMUZIK released his debut studio album “Electronic Dream,” which he followed with a batch of releases, including “Instrumental University” and “For Professional Use Only.” In 2013, the DJ released “The Remixes, Vol. 1” that includes remixes of hits by Skrillex, Steve Aoki and Benny Benassi.

There will be free food and beverages, along with beer for those 21 years and older, with proof of I.D. RedBull MXT will host DJ Thomas Jack, along with student DJs, to perform in between main stage sets. RedBull will be giving out free samples during the event.