‘Invention of Religion: Jews and Christians in the Ancient World’ to Be Presented March 26

A renowned authority in Talmudic culture, Daniel Boyarin from the University of California at Berkeley will speak at the Judaic Studies Program’s B.G. Rudolph Lecture. He will present “Jewish and Christian Apologetics and the Inventions of Religion” on Wednesday, March 26, at 7 p.m. in room 010 of Crouse-Hinds Hall. The lecture is free and open to the public. 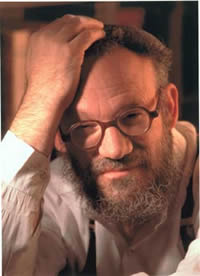 Professor Boyarin is the Herman P. and Sophia Taubman Professor of Talmudic Culture and won the 2006 Award for Excellence in the Historical Study of Religion from the American Academy of Religion. He’s written several acclaimed publications, including “Carnal Israel: Reading Sex in Talmudic Culture” (University of California Press: Berkeley, 1993) and “Dying for God: Martyrdom and the Making of Christianity and Judaism” (Stanford University Press, 1999). Boyarin is a well-known scholar, author and lecturer with work that expands beyond cultural studies in the Talmud to include gender and sexuality, hermeneutics, and ancient Judaism and Christianity.

What did ancient Jews and Christian mean by the term “religion” and how did politics influence discussions about it? As part of an ongoing interest in Jewish-Christian relations in the ancient world, Boyarin will share his thoughts about the “invention of religion” by Jewish and Christian authorities.

About Boyarin’s work, the Jewish Quarterly wrote, “Boyarin has placed the separation of Judaism and Christianity into the historical context of real people attempting to understand themselves and one another, and the once-familiar story will never again look the same.”

Boyarin’s presentation is a part of the B.G. Rudolph Lecture series that was created in 1973 by Bernard G. Rudolph to bring distinguished Judaic studies scholars to SU’s campus. For more information on the program or the lecture series, contact Zachary Braiterman, Judaic studies program director, at 315-443-5719.