Hollywood Executive to Discuss Purpose and Faith with SU Community 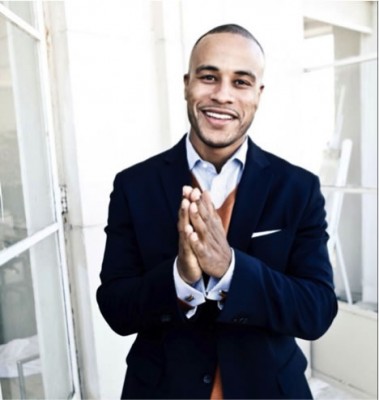 DeVon Franklin, senior vice president for production at Columbia Pictures, will be joining Soulful Sit-Downs, the student-run discussion series about life’s big questions, via Skype for a conversation on Thursday, April 3, at 7 p.m. Sean Martinelli ’15, a Newhouse broadcast and digital journalism student, will guide the Skype conversation with Franklin in room 204 of the Tolley Building.  The discussion will also be live streamed here.

Space for the event will be limited, so attendees should email Martinelli (stmart06@syr.edu) with their intent to attend.

Franklin’s conversation will focus on how students can remain true to themselves, and use their career as a vehicle for fueling passion and serving others. Students will also have the opportunity to ask Franklin questions during the conversation.

“DeVon exemplifies what it means to live an authentic life. His unwavering faith is both powerful and inspiring, and I’m excited to share his story through Soulful Sit-Downs,” says Martinelli.

Franklin is regarded as one of the entertainment industry’s most dynamic thought leaders. In addition to overseeing some of Hollywood’s biggest hits, including “The Pursuit of Happyness,” his 2012 book “Produced by Faith” has garnered national praise. Franklin recently appeared on Oprah Winfrey’s Emmy-award winning series Super Soul Sunday, which led Winfrey to describe him as “a bona fide dynamo,” and “a different kind of spiritual teacher for our times.”

He was also named by The Hollywood Reporter as one of the top 35 executives under 35 and one of the top 10 industry impact players by the NAACP. He has appeared on CNN, Fox News and NBC, and in magazines such as Essence, Ebony and Jet. Franklin is a graduate of the University of Southern California, and currently lives in Los Angeles with his wife Meagan.