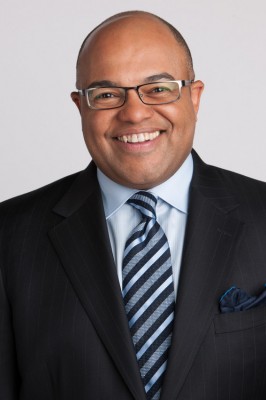 Award-winning journalist Ted Koppel ’60 and award-winning sports broadcaster Mike Tirico ’88 share many things in common. Both are SU alumni, and both have risen to the top of the broadcast profession. Both Koppel and Tirico also shared a common training ground in WAER-FM, and now both will share a place on the station’s Wall of Fame.

Koppel was inducted in 2012, and now Tirico will join him on the wall during a ceremony Feb. 28. WAER General Manager Joe Lee described the Wall of Fame as a “Mount Rushmore” of broadcasting greats. Already, Hank Greenwald ’57 and Andy Musser ’59 are on the wall, as is Ian Eagle ’90. Soon, Bill Roth ’87 and Sean McDonough will join them too.

As part of Tirico’s induction, Pete Gianesini ’94 (a fellow colleague at ESPN) offered the following thoughts as part of a piece that’s being distributed internally at ESPN.

“Having been born up the street in Bristol Hospital, raised a town over and now part of the ESPN Radio team for 16-plus years, Bristol and the surrounding area has been my home for all but the four years spent as a student at Syracuse University, followed by a brief stay there in local radio. This weekend I have the pleasure to return to my other ‘home’ to help WAER Radio at SU induct Mike Tirico into its Hall of Fame. WAER’s sports department is entirely student-run, and is the place where many celebrated sports broadcasters, producers and executives learned their trade. And, yes, I worked there too.

“I’m not going to take this space to detail Mike’s broadcasting accomplishments or the events he has covered, which on its own has and will make him a Hall of Famer in any of a number of areas. Why this one is so special to me and many other WAER alums and students who will be there, is to give back just a small amount of the time that Mike has at some point or another invested in all of us. My first ESPN experience was as Mike’s guest, on a tour while in town with WAER’s broadcast team covering Syracuse’s 1994 game in Hartford vs. Connecticut. I still have that SportsCenter set photo—joined by current ESPN play-by-play voice Dave Pasch, NFL Network Anchor Andrew Siciliano and Detroit Sports Radio Host Matt Dery.

“Fast forward to 2007, 10 years into my career at ESPN, where I had the pleasure to work with Mike in launching ‘The Mike Tirico Show’ that fall. Our management team identified Sept. 20 as the planned launch date, so I called Mike to run it by him. He said he had to be in Syracuse that day for the dedication of Newhouse 3, the third building comprising the S.I. Newhouse School of Public Communications, which, to come full circle, is hosting Mike’s Hall of Fame Induction this weekend. We discussed doing the debut show from WAER, where we could not only tap into the guests on hand (Bob Costas and Jim Boeheim joined us in studio) but it was very important to Mike that we would also share the event with the current crop of students, who had that same look of awe watching the show that I had on that ESPN tour in ’94 or for that pickup game in ’92.

“Skipping a dozen other stories I could tell, I’ll fast-forward to last year, when the aforementioned Matt Dery was about to be hired at our ESPN Radio affiliate to host his own show, and texted me to let me know the announcement was the next day. I simply wrote back, ‘Does Mike know?’ Matt wrote back that he did and was a huge help through the process.

Tirico will be honored during ceremonies on Friday, Feb. 28, from 5:30-9 p.m. in the Joyce Hergenhan Auditorium in Newhouse 3. Ticket information is available at https://secure.www.alumniconnections.com/olc/pub/SYR/event/showEventForm.jsp?form_id=167053.