The Sport Management (SPM) Club raised $30,500 for the Food Bank of Central New York at its ninth Annual Charity Sports Auction. During the SU men’s basketball game on Dec. 7, Food Bank supporters placed bids on hundreds of items, including sports memorabilia, electronics and tickets to major sporting events. Following the silent auction, the club hosted an online auction, in collaboration with Steiner Sports Memorabilia, which showcased a number of premium items up for bid. All proceeds from these efforts benefited Food Bank of Central New York. 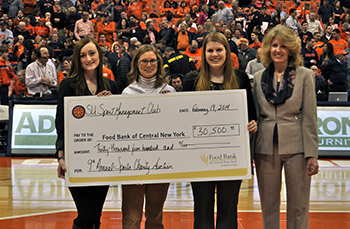 “As a result of months of hard work on behalf of over 75 Syracuse University students, 79,300 meals were provided to those families in need in our community,” said Kate Veley, SPM club co-advisor. “We simply couldn’t be more proud of our students, or more thankful of the Central New York community who once again recognized a need and worked together to help us make a difference.”

“Food Bank is thankful to have been chosen as the charity partner for the Sport Management Club’s ninth Annual Charity Sports Auction. The students involved were dedicated to the cause of raising funds for Food Bank of Central New York. Their efforts will help ensure that families and individuals in our community have nutritious food available to them through the emergency food network. We thank them for the opportunity to raise awareness and funds for our hunger-relief mission,” said Kathleen Stress, executive director of Food Bank of Central New York.

For more about the charity auction, or to find out how to contribute to next year’s event, visit www.sucharitysportsauction.com for the most current and up to date information.