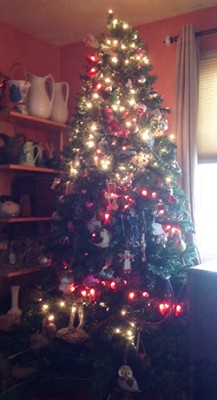 The Amodys’ Christmas tree as it looked until Wednesday night.

Amody is an 18-year employee of Syracuse University and a Navy veteran, and works as a parking lot attendant in the Waverly Avenue booth. He and his wife, Jill, have been big SU basketball fans “for more than 20 years,” says Ken. This year’s streak (which came to an end Wednesday night against Boston College) was “beautiful” according to Ken, and the boys, he says “just got tired.”

But as the result of the loss, Ken’s living room will now have some more space—the space in the corner where his Christmas tree has stood for the better part of three months. He and Jill decided right around the game against Clemson that they would keep their Christmas tree, adorned with orange ornaments, in place until the winning streak came to an end. Now, long after the presents were opened, the Amody tree will finally be coming down.

In case you were wondering (and we know you were) the tree is artificial. “It’s not a fire hazard,” says Ken, who adds “it was fun to see how long we would keep it up.”

That would be 56 days after Christmas.

But now, Amody is hoping for a new tradition to begin, starting with the game on Saturday against Duke. This tradition, he says, will not include a tree in his living room.