The Native American Studies Program in The College of Arts and Sciences has a new director. Formerly a visiting faculty member at the University of Notre Dame, Scott Manning Stevens will lead the college’s rapidly growing interdisciplinary program in Native American Studies (NAS). While teaching at Notre Dame, Stevens simultaneously served as the director of Newberry Library’s D’Arcy McNickle Center for American Indian and Indigenous Studies in Chicago. 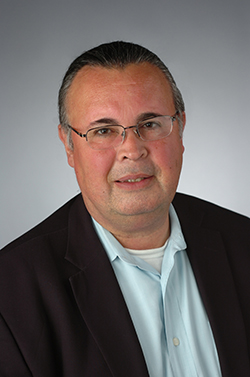 “I couldn’t be more excited to be joining the dedicated and esteemed faculty at The College of Arts and Sciences,” says Stevens. “SU is uniquely situated in Onondaga Nation Territory, the heartland of the Haudenosaunee, and provides an ideal environment in which to educate students with an interest in Native American studies. The NAS Program has taken off in recent years and I’m looking forward to capitalizing on that momentum and building an even more robust program in the future. I am especially gratified to be returning to New York State, where I was raised, and have this unique opportunity in my home territory.”

Stevens, a citizen of the Akwesasne Mohawk nation, holds a Ph.D. and master’s degree from Harvard University. A highly sought-after educator, Stevens has taught at a number of universities, including Harvard, Arizona State and SUNY Buffalo. He was awarded a Ford Postdoctoral Fellowship at Brown University and held a number of fellowships at major archives. Stevens has lectured broadly throughout the United States and internationally.

An avid researcher, Stevens’ primary areas of interest include diplomatic and cultural strategies of resistance among North American Indians in the face of European and American settler colonialism, as well as the political and aesthetic issues that surround museums and the indigenous cultures they put on display. Stevens is also preparing to publish a book-length research project titled “Indian Collectibles: Encounters, Appropriations, and Resistance in Native North.”

“We’ve seen tremendous growth in Native American studies over the last several years and I’m confident Scott is the right person to not only drive interest among students already at SU, but also attract prospective students and faculty in the coming years,” says Arts and Sciences Dean George M. Langford. “Scott’s commitment to education, research and student advisement will allow him to serve in this role in a manner that will serve the college well.”

The NAS program launched in 2001 and, in addition to offering a minor that includes roughly 20 courses, the college launched a Certificate in Iroquois Linguistics for Language Learners in 2012. In his role as NAS program director, Stevens will develop and grow the program, build and manage the curriculum, advise students and teach undergraduate courses.