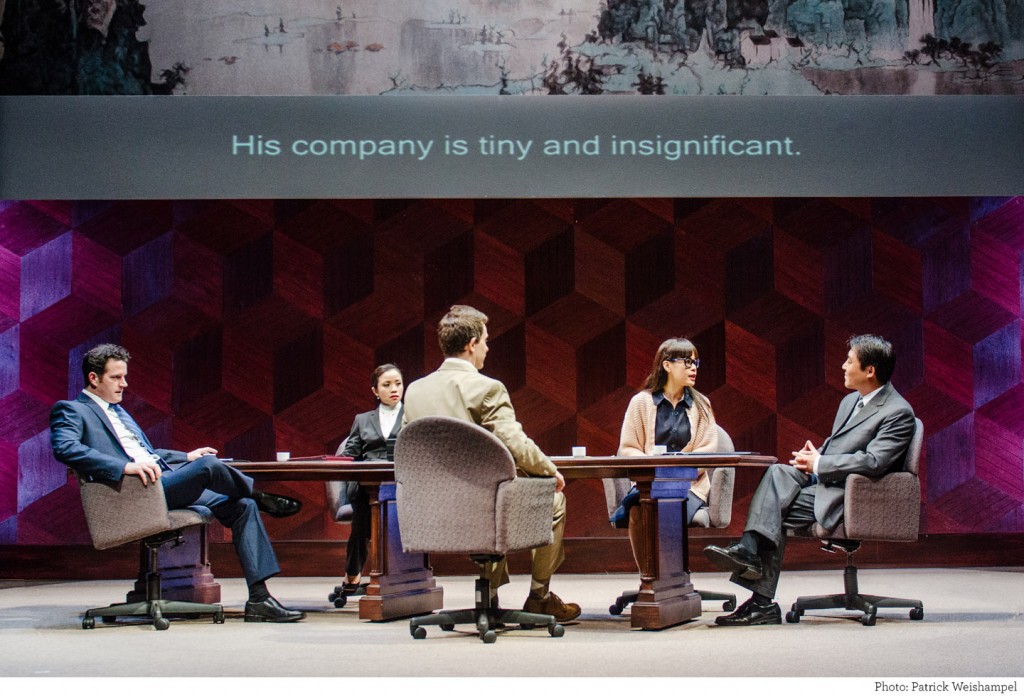 Daniel Cavanaugh tells the Minister of Culture about his small family firm in “Chinglish.”

“Chinglish” is Tony Award-Winning playwright David Henry Hwang’s hilarious new comedy about the misadventures of miscommunication. It tells the story of an American businessman, Daniel Cavanaugh, who travels to a bustling Chinese province looking to score a lucrative contract in properly translated signs. But the deal isn’t the only thing lost in translation as he tangles with a government official, a bumbling consultant and a surprisingly sexy bureaucrat along the way. Time magazine named “Chinglish” one of the best plays of 2011, and the New York Post called it “a comedy gold mine!”

“Chinglish” performs Feb. 26–March 16 in the Archbold Theatre at the Syracuse Stage/Drama Complex. It is recommended for mature audiences. Tickets can be purchased online at http://www.SyracuseStage.org, by phone at 315-443-3275 or in person at the Syracuse Stage Box Office at 820 E. Genesee St. Discounts are available for groups of 10 or more at 315-443-9844.

Pre- and post-show events during the run of “Chinglish” include the Opening Night Party on Feb. 28 with live music by Merit (http://www.gomeritgo.com), Wednesday @ 1 Lecture on March 5 (“Facing East: The Theater of David Henry Hwang” with Christian DuComb, assistant professor of English and theater at Colgate University), Happy Hour on March 6 (with half-price drinks and complimentary snacks), an Actor Talkback following the 7 p.m. show on March 9 and Prologues (moderated discussions with actors) on March 2, 8 and 13. Visit Syracuse Stage Events for more information.

Hwang drew inspiration for “Chinglish” from the common miscommunications he experienced while on business trips to China. On one trip in 2005, he visited a brand-new cultural center where everything was gorgeous, except for the badly translated, “Chinglish”-y signs. “For instance, the designation on the handicapped restrooms that read, ‘Deformed Man’s Toilet.’ “I started to think about using those signs as a jumping-off point for a play about doing business in China today, one that would deal with the issue of language. I’d never seen a play deal with this,” he says.

Nearly half of “Chinglish” is in Mandarin Chinese that is translated with more than 750 surtitle slides, letting audience members in on humor that stems from miscommunication between the plays’ characters. Almost all of the actors in “Chinglish” are required to speak fluent Mandarin Chinese. Three translators and a cultural consultant assisted the cast and creative team.

“Chinglish” debuted on Broadway in 2011 at the Longacre Theatre after a successful run at the Goodman Theatre, where it earned Hwang the coveted Jeff Award in the New York category. “’Chinglish’ explores the different levels on which people and cultures misunderstand each other,” Hwang says. “The most superficial of these is language. Going deeper, we encounter differing cultural assumptions and preconceptions. Beneath this, even when two people speak the same language, they often misunderstand each other, particularly in the arena of romance. In the play, two people discover they hold very different assumptions about the importance of love and the role of marriage in life.”

May Adrales, director of “Chinglish” at Syracuse Stage, recently directed Hwang’s “The Dance and the Railroad” at NYC’s Signature Theatre Company followed by a run at the Wuzhen International Theatre Festival in China.