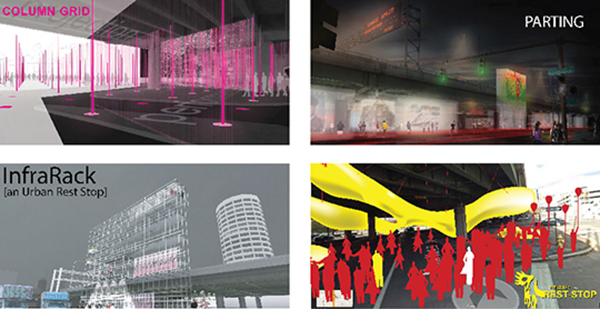 Finalists for the Urban Rest Stop Design Competition were announced on Feb. 14

UPSTATE, a center for design, research and real estate at Syracuse University’s School of Architecture, announced the finalists for the Urban Rest Stop Design Competition on Feb. 14. The goal of the competition, made possible by a grant from the National Endowment for the Arts, is to create an interactive environment for interstate travelers and residents beneath a section of I-81, where the elevated highway meets the Connective Corridor.  A site of intense interest, the viaduct’s construction runs through Syracuse, separating the University Hill from the city’s revitalizing downtown.

I-81 reaches the end of its functional life in 2017. The New York State Department of Transportation is getting closer to deciding the future of this stretch of the expressway; options include rebuilding the section of highway or replacing the elevated viaduct with a boulevard.

The Urban Rest Stop (URS), an alternative to the traditional highway rest stop for motorists in isolated locations, will be a multidimensional exhibition with lighting, signage, art projects and mobile facilities created by artists and designers to enliven the space and engage the public. Teams were asked to incorporate projects from arts and cultural organizations including: the Photography and Literacy Project, the Urban Video Project, the Mobile Literacy Arts Bus and the Southside Initiative, among others.  The four finalist projects are:

“This project presents an opportunity to provide amenities to local residents that are not normally available, while also engaging travelers and presenting the opportunities and initiatives in the city,” says UPSTATE Director Marc Norman.

Marion Wilson, a collaborating artist and a first-round competition juror, stated, “What I was looking for at this phase was really how the design team was thinking. Had they considered our work and our videos; did they understand the complexity and the history of this space for the city; and did they create collective gathering spaces and density?”

The four teams will now participate in information sessions, with final competition entries due on March 15. The winner will be announced on April 15 and construction will begin in summer 2014. An opening event is planned for early September.

The URS competition is part of a larger initiative involving the future of I-81 in which UPSTATE and the School of Architecture are involved. In spring 2013, the school and UPSTATE hosted an exhibition of work by Syracuse University students exploring post-2017 possibilities, the result of a joint research project addressing the question of what kind of development along the I-81 corridor would be best serve the city of Syracuse and how the future of the viaduct can play a role in transforming the city. With assistance from the NEA, UPSTATE also produced a series of videos that discuss the impact of Interstate 81 and the questions that should be asked to ensure a positive outcome for the city and region. The series can be viewed here: http://upstate.syr.edu/uncategorized/rethink-81to-reclaim-the-city-and-reconnect-syracuse.