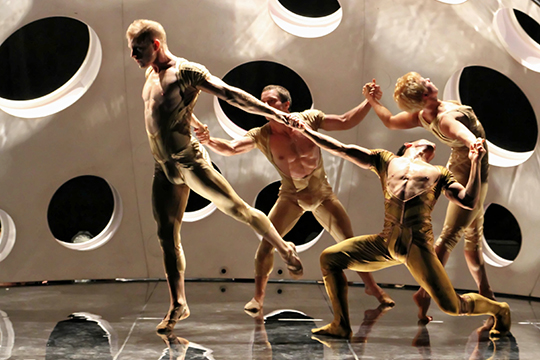 Diavolo Dance Theater will perform “Fluid Identities” at the Landmark Theater on April 4.

The high-energy and visually stunning Diavolo Dance Theater, presented by Syracuse University Arts Engage, will return to Syracuse to perform its new work, “Fluid Identities,” co-commissioned by SU Arts Engage, on Friday, April 4, at 7 p.m. at the Landmark Theater in downtown Syracuse.

Tickets are $35 for adults; $15 for children younger than 12, students and seniors; and $10 for SU faculty, staff and students with valid I.D. There is a buy one, get one free (BOGO) promotion available—one free child’s ticket with the purchase of an adult ticket. Tickets are available at the Landmark Box Office, 362 S. Salina St, 475-7980, or through SU Arts Engage at SU Arts Engage at 443-0296 or suartspresenter@syr.edu.

Members of Diavolo will engage in various activities with SU students during the company’s residency here the week of March 30.

An internationally known modern acrobatic dance company, Los Angeles-based Diavolo was established by artistic director Jacques Heim in 1992. The company uses abstract and recognized structures to explore the relationship between the danger of our environment and the fragility of the human body. Diavolo is made up of people of varied abilities and training—dancers, gymnasts, rock climbers and actors—all of whom are teammates. By working collaboratively, they explore the challenges of relationships, the absurdities of life and the struggle to maintain humanity.

“Fluid Infinities” is set on an abstract dome structure sitting on a reflection of itself, allowing the performers to explore metaphors of infinite space, continuous movement and voyage into the unknown future. The dome’s organic patterns evoke the craters of the moon, a honeycomb of bees, a shifting brain or an undiscovered starship. “Fluid Infinities” investigates the persistence of life through struggle and the promise of life to change beyond the space of time. The work is set to Symphony  No. 3 by Philip Glass and is the third in a triptych of works created for the Hollywood Bowl in Los Angeles.

“Fluid Infinities” was commissioned by the Los Angeles Philharmonic Association and co-commissioned by SU Arts Engage and Movimentos 2014, University of Notre Dame’s DeBartolo Performing Arts Center The work premiered in September 2013 at the Hollywood Bowl. See more at: http://www.diavolo.org/repertoire/fluid-infinities-2/#sthash.qVCW17Vz.dpuf.

Diavolo’s relationship with Syracuse University began in 2012, when the company embarked on a weeklong residency here, working with students on dance, movement and lighting. During that residency, Diavolo added to its work on “Transit Space,” a performance piece inspired by the movement of skateboarding. They also performed “Trajectorie,” which will again be performed this year.

“Diavolo and their artistic director, Jacques Heim, are natural collaborators,” says SU Performing Arts Presenter Carole Brzozowski. “They operate as a creative team building the choreography, developing the design and bringing all of the pieces together as a flexible and organic unit under Jacques’ leadership. Their generous willingness to collaborate in public is the centerpiece of the residency that we have created with them. I love Diavolo’s ability to put their process to the test in full view of our students and the community. You cannot help but learn something new every time you see them work.”

Since its inception in 1992, Diavolo has toured extensively through Europe, Asia and Latin America. The company was officially recognized as a cultural treasure by the City of Los Angeles in 2007.