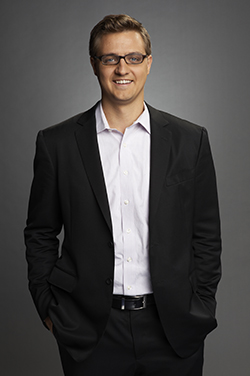 MSNBC host Chris Hayes will speak about the crisis of authority in American life in the first University Lectures event of the spring 2014 season on Tuesday, Feb. 25, at 7:30 p.m. in Hendricks Chapel.

Hayes is the first guest in a semester that will include New Yorker cartoonist Roz Chast, “Theories of Everything and Much, Much More,” Wednesday, March 5, at 7:30 p.m.; playwright and activist Anna Deavere Smith, “Snapshots: Portraits of a World in Transition,” Tuesday, March 25, at 5 p.m. and education advocate and professor Diane Ravitch, “The Death and Life of the Great American School System,” Tuesday, April 1, at 7:30 p.m.

Hayes will speak on “Twilight of the Elites.” The lecture is free and open to the public; reduced-rate parking is available in Irving Garage. American Sign Language (ASL) and Communication Access Real Time (CART) interpretation will be available for this lecture.

Host of “All In with Chris Hayes,” which airs at 8 p.m. (Eastern) Monday through Friday on MSNBC, Hayes is also editor-at-large of The Nation. Previously, he hosted the weekend program “Up with Chris Hayes,” which premiered in 2011. Prior to joining MSNBC as an anchor, Hayes served as a frequent substitute host for “The Rachel Maddow Show” and “The Last Word with Lawrence O’Donnell.” He became a MSNBC contributor in 2010 and has been with The Nation since 2007.

He is a former fellow at Harvard University’s Edmond J. Safra Foundation Center for Ethics. From 2008-10, he was a Bernard Schwartz Fellow at the New America Foundation. From 2005 to 2006, Hayes was a Schumann Center Writing Fellow at In These Times. Since 2002, Hayes has written on a wide variety of political and social issues, from union organizing and economic democracy to the intersection of politics and technology. His first book, “Twilight of the Elites: America After Meritocracy” (Crown, 2012) was published in June 2012.