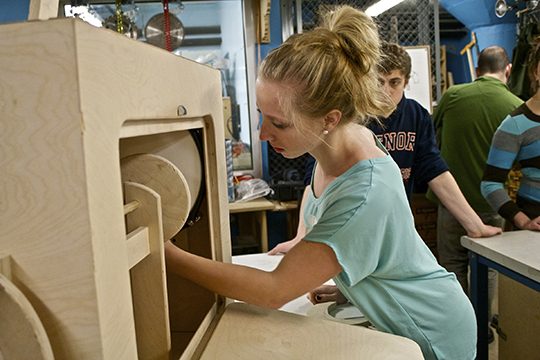 Casey Alterio, a freshman music education major, works on one of the intonarumori.

On a recent Friday evening in Crouse College, Zeke Leonard rolled out a curious-looking contraption. A wooden box with a lever, hand crank and an attachment that resembles a veterinary cone collar, you would never guess that it is intended to be used to make music.

But that is exactly its purpose.

Through a unique project fostered by SU’s Arts Engage, Leonard, an assistant professor of design in the College of Visual and Performing Arts, is building intonarumori—noise-generating devices. Seven students in the Setnor School of Music will experiment with and learn to play these instruments and, in turn, collaborate with members of the renowned Kronos Quartet in playing them during the quartet’s final residency events in Syracuse in late February. An open demonstration, free and open to the public, will be held Wednesday, Feb. 26, at 7 p.m. at St. Paul’s Episcopal Cathedral, 220 E. Fayette St. in downtown Syracuse.

Kronos Quartet has been engaged in a three-year residency with SU, and the genesis of the intonarumori project began during Kronos’s visit to Syracuse in November 2013, when the quartet participated in events celebrating the 50th anniversary of SU’s Belfer Audio Laboratory and Archive. It was there that Kronos’ David Harrington learned more about intonarumori, devices developed by Italian Futurist painter and composer Luigi Russolo.

Russolo’s 1913 manifesto, “L’Arte dei Rumori” (“The Art of Noises”), argued that the Industrial Revolution had given modern people the ability to appreciate more complex sounds. He designed a number of noise-generating devices, assembled an orchestra and performed with them before and after World War I. The concerts were often met with strong disapproval.

None of Russolo’s original intonarumori pieces survive today; only 1913 original patent drawings still exist. Kronos commissioned Leonard to create a quartet of intonarumori from the patent drawings to be used during the February residency activities. Leonard studied the drawings online and watched videos of replications that have been made in recent years. “My process was watching those videos and looking at the drawings and piecing together what I could, based on what I saw,” he says. “I have arrived at something that seems to work and look like the originals.”

During this residency, the project will bring students and members of the Kronos Quartet together to collaborate in creating music with these noise-generating devices.

“We are offering Kronos the opportunity to use Syracuse University as a laboratory,” says Carole Brzozowski, SU’s performing arts presenter. She has told the participating students of the one-of-a-kind opportunity this project presents. “How often does a group take a risk and sit with a group of students as the most vulnerable people in the room?” she asks. “When the masters come to the students, the students are the masters in this case.”

The seven students participating in the project are from SU’s Setnor School of Music and represent a range of majors, including performance (cello, violin and saxophone), music industry and music education. The students and Leonard met on Feb. 15 at the Nancy Cantor Warehouse to experiment with and learn to play the intonarumori.

The Kronos residency begins Feb. 24, and includes an advanced workshop with the students and Leonard and a Feb. 25 hands-on lesson prior to the workshop performance on Feb. 26. Kronos members will also visit an experimental audio course in the foundations department and an orchestra rehearsal with Leonard and the intonarumori during the residency.

Leonard demonstrated the intonarumori for students during that first Friday evening gathering , moving the lever on the top and spinning the crank on the back to produce noise. Opening the box revealed a wheel and string as the main internal components. Making even a slight change to the design, such as replacing the wheel with one of a different shape, alters the sound. And that dog collar on the front? It serves to direct the sound.

Leonard notes that we—like the Futurists—are living in a similar age technologically—one that is radically shifting. “We are living in the future that Russolo was writing about,” he says. 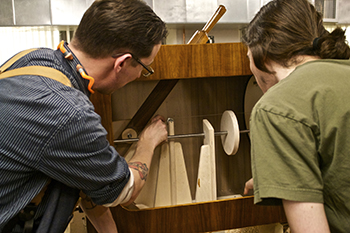 VPA Assistant Professor Zeke Leonard, left, and Dyland Beckemen, a freshman music major, peer inside one of the intonarumori.

As Leonard demonstrated the intonarumori, ideas and enthusiasm began percolating among the students. What about adding strings, adding a screen door spring or hooking up to a synthesizer?

“If you want to throw a banana peel in there I am ready to give it a shot,” says Leonard. “The rule is that there are no rules. … My charge for you is to think about all the things we can do with this, to make noise and embrace that as music.”

Greg Kaplan, a sophomore music industry major from Smithtown, N.Y., was recommended for the project by Josh Dekaney, a percussion instructor in VPA. “I would like to see us really transcend time with this very odd instrument,” he says. “If we utilize the technology we have in the 21st-century, we can get some really crazy and wicked sounds.”

Kaplan says the project will give him and the others experience in musical creativity, as they are building instruments from scratch and finding uses for them in a musical context. “This project will be a huge challenge, but I am looking forward to every step of the way, especially since no one knows what is going to happen in the end. The idea of being able to musically live on the edge is new and thrilling to me.”