Helping Bring the Olympics to the World 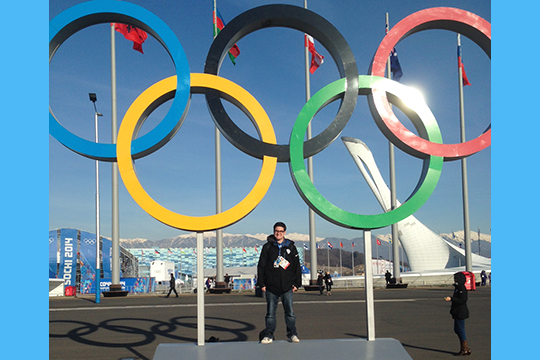 The Sochi Olympics has us riveted to our televisions as the athletes ski, skate and speed into sport legend.

Syracuse University students are playing a part in helping to bring the drama to fans around the world—with NBC and with the International Olympic Committee.

Twenty-three Newhouse School of Public Communications students are interning with NBC in Sochi to assist in a variety of ways in the network’s expansive coverage. Another 10 students are stationed at NBC’s sports operations facility in Stamford, Conn., the hub for all Olympic information.

Some students may be helping process information and gather statistics, and others might be assisting camera crews in the field, among many production tasks, says Hub Brown, associate dean and associate professor of broadcast and digital journalism.

Many of the students are in broadcast journalism, but there are majors represented from across the school.

“They are learning about the day-to-day work environment and working deadlines,” Brown says. “They are exposed to the high-quality production values in these places and what’s demanded so they can see in a live sports environment what kinds of skills are needed.”

There’s also the experience itself.

“Part of this is getting them to understand what it’s like to be in the middle of a gigantic history-making event, and that’s part of what we do to in journalism,” Brown says. “They have a front seat to this huge event.” 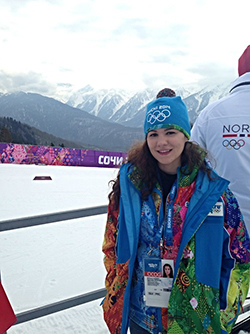 Brittany R. Legasey ’13, a master’s student in the School of Information Studies, is making sure members of the world media have their front seat to the excitement. She works as a volunteer press assistant for the International Olympic Committee, working at Endurance Village, which houses competitors in the biathlon and cross-country skiing events.

Legasey, who earned a bachelor’s degree in history, political science and international relations, applied online through the Olympic Organizing Committee website. She initially was enrolled in Newhouse as a first-year student and thought of participating in the NBC internship after hearing about the Vancouver experience from other students.

“I eventually decided that I didn’t want to be a journalist, so I opted to do something with press management at the Olympics because I focused on media strategy and media management in each of my three majors,” Legasey says.

After arriving in Russia Jan. 16, Legasey, who is also writing a blog for Syracuse.com, produced the English version of the press materials about Endurance Village. She is the only native English speaker working in press operations at the venue and works with two Russian counterparts.

“Primarily I manage the accreditation process for journalists visiting our venue, providing media passes when appropriate and making sure that the journalists stay within the appropriate areas of the complex,” she says. “This was particularly difficult during the two days journalist were allowed unrestricted access for tours.”

Although she did take Russian courses at SU, challenges with the language and the transportation system and a two-hour commute each way on her work days have not stopped her from experiencing what she can while in Sochi.

“I’ve explored the city of Adler, where the Olympic Park is located, and the Black Sea with my Russian roommates,” she says. She also spends time with colleagues and connects with new people in the Olympic village, including athletes, through a social networking website.

The experience has changed Legasey’s view of the world and about media management.

“I learned that press operations is reactive rather than proactive,” Legasey says. “When I return to the states I hope to work doing media management for a political campaign, so I think my work here will be a huge asset to that aspiration.” 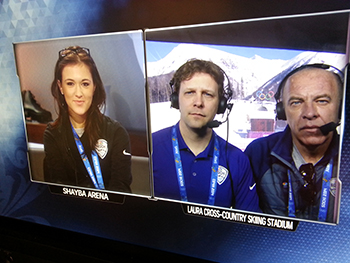 Small numbers of students had been going to the Olympics for many years with NBC through Newhouse, but it wasn’t until the Athens summer games in 2004 when larger groups started to assist at every winter and summer Olympics. The NBC interns go through an application and interview process before they are selected.

Students who have been to prior Olympics, such as the summer games in London two years ago, provide other students interested in applying with the best information.

“Those students come back and say it was an amazing experience. It gets them fired up about their careers,” Brown says.