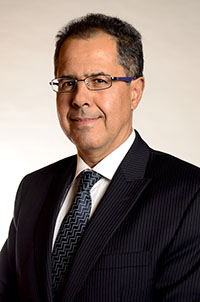 A noted Latin American scholar, policy maker, teacher, diplomat and journalist has been named the inaugural Jay and Debe Moskowitz Endowed Chair at the Maxwell School of Citizenship and Public Affairs. Rafael Fernández de Castro, founder and chair of the School of International Studies at the Instituto Tecnológico Autónomo de México (ITAM) and former foreign policy advisor to the president of Mexico, will bring exceptional new depth and expertise to the school’s teaching and scholarship on contemporary Mexico-U.S. affairs.

Joining the Maxwell School in July 2014, de Castro will focus his research and teaching on Mexico-U.S. trade issues, immigration policy, economic development and political economy in Mexico, and social outcomes for Mexican immigrants in the United States. He will also advise students who are interested in studying or working in Latin America and will organize conferences and symposia on topics related to Mexico-U.S. relations.

“Rafael Fernández de Castro’s remarkable career as a scholar and as a policy maker will further strengthen Maxwell’s special ability to bridge the worlds of research and practice and will provide Maxwell students with an invaluable window into Mexico-U.S. relations,” says Dean James Steinberg.

De Castro is an expert on the bilateral relationship between Mexico and the United States, as well as on Mexican foreign policy. He has written and co-edited more than 30 books on Mexico-U.S. relations, U.S.-Latin American relations and Mexico’s foreign policy, including “United States and Mexico: Between Partnership and Conflict with Jorge Domínguez” and “The Controversial Pivot: The U.S. Congress and North America with Robert Pastor” (both also published in Spanish).

From 1991-2008, de Castro was chair and professor at the School of International Studies at ITAM; in June 2008, he was named foreign affairs advisor to the president of Mexico and served in that position until February 2011. He coordinated the 2013-2014 United Nations Development Programme’s Human Development Report for Latin America, “Citizen Security with a Human Face: Evidence and Proposals for Latin America.”

He is the founder of Foreign Affairs Latin America magazine; the U.S.-Mexico Futures Forum with the University of California, Berkeley; the Mexican Council on Foreign Relations, serving as its first vice president; the Institute for European Integration Studies; and the Center for Inter-American Studies and Programs, sponsored by the Ford Foundation.

Jay and Debe Moskowitz, U.S. citizens who now make their home in Mexico, established the chair to improve understanding of Mexico’s economic and social importance to the United States. “Unfortunately,” says Jay Moskowitz, “too many Americans understand Mexico only through the lenses of immigration and drug trade. In fact, Mexico is the United States’ fastest growing neighbor and its influence and economic strength will only grow. It’s crucial that Americans begin to better understand their connections to Mexico, and well-supported university study is certainly a good place to begin.”

Jay Moskowitz is a Maxwell graduate, with a 1975 Ph.D. in social science, and views de Castro as fitting a Maxwell faculty tradition. “Many of the Maxwell professors I valued brought sound academic research to bear on real-world issues. While great scholars, they also engaged questions of public policy,” Moskowitz says. “Debe and I are thrilled that Dr. de Castro fits that mold.”