William P. Ehling ’43, G’52, G’54, professor emeritus and founder of the public relations department at the Newhouse School, died Feb. 7. He was 93. 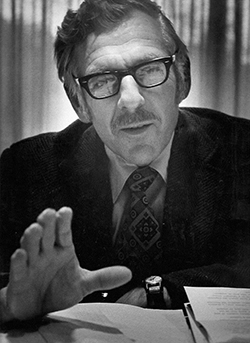 Ehling taught at Syracuse University from 1954 until his retirement in 1991. During his tenure, he served as the director of graduate studies at Newhouse, and was also the University’s director of public relations and head of the Office of Information Services from 1954–1963.

In 1968, he established the Syracuse chapter of the Public Relations Student Society of America (PRSSA), one of the first PRSSA chapters in the country. The chapter was re-named in his honor in 1990, and remains active today, with more than 200 members.

With Betsy Plank, he co-authored the 1987 report of the Commission on Public Relations Education, which set the standards for undergraduate education. And he was a contributor to James E. Grunig’s watershed study “Excellence in Public Relations and Communication Management.”

He earned a bachelor’s degree from Newhouse (then the School of Journalism) and the College of Arts & Sciences, and master’s and doctoral degrees from the Maxwell School of Citizenship and Public Affairs.

Born in Bectelsville, Pa., he had lived in Syracuse since 1939.

Burial will be private, with a graveside service for the family this spring.

Notes of remembrance may be sent to Maria Russell, public relations chair, at mprussel@syr.edu.