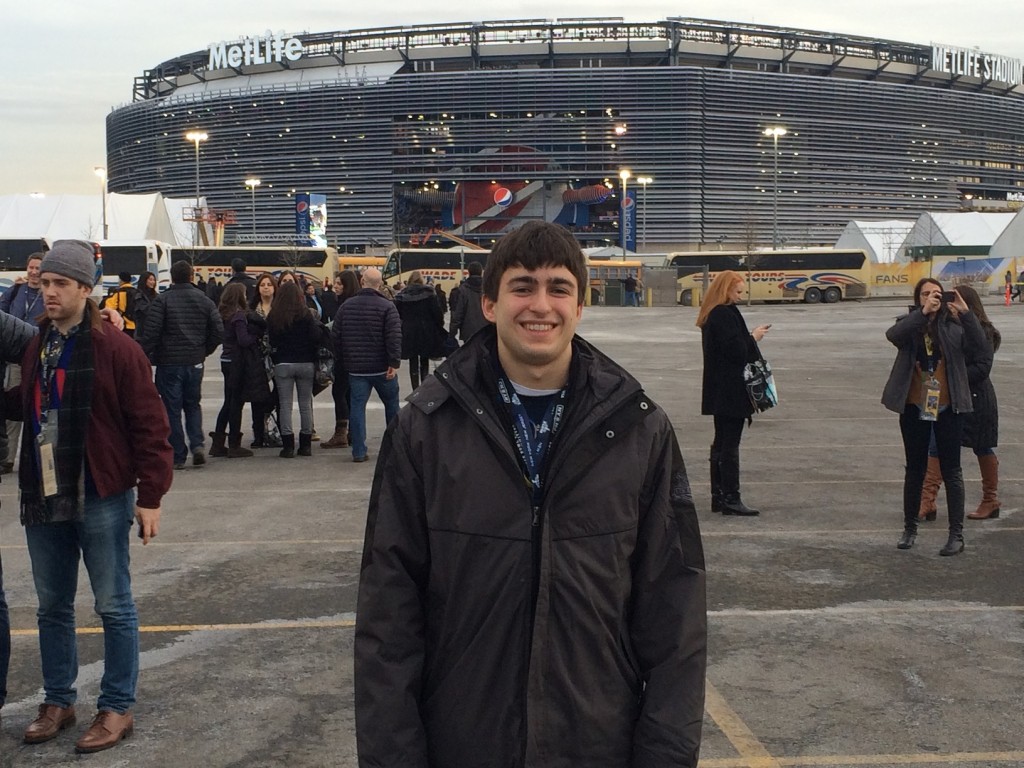 Steven Kozar ’14 gets ready to watch the action with other Super Bowl fans inside the Metlife Stadium after spending his sport management capstone working with the NY/NJ Super Bowl Host Committee.

It took about three hours for the Seahawks to take down the Broncos in Super Bowl XLVIII. The experience for Steven Kozar ’14 will last a lifetime.

As part of his 12-credit sport management capstone in Falk College, Kozar worked as an intern with the NY/NJ Super Bowl Host Committee—an opportunity that had him organizing fan events and connecting with fans over social media, among other responsibilities, up until the big game.

“Whether I’m back at Syracuse or beyond in my professional career, this experience is something that I’m going to hold for the rest of my life,” Kozar says.

Kozar submitted his resume to the organization after speaking with Associate Professor Gina Pauline, who mentioned the opportunity. He began an internship with the host committee’s executive department in the summer of 2013, working within the offices of Chief Executive Officer Alfred Kelly and Senior Vice President and Chief of Staff Jen Gilke.

“It was a great opportunity to get a broad sense of company,” Kozar says. “I did a small project with marketing and they liked me and knew I had to do a capstone with sports management degrees so they asked me to stay onboard. I was beyond excited and thankful that they did because I was able to stay up until the Super Bowl.”

As the fall kicked in, Kozar worked on the “Join the Huddle Tour,” the first-of-its-kind mobile tour associated with the Super Bowl. The mobile truck—“the Huddle Shuttle”—carried the Vince Lombardi trophy and replicas of memorabilia, such as from Lombardi and Eli Manning, while visiting high schools, college football games, family festivals and philanthropic events at Boys & Girls Clubs and Special Olympics.

The event at the Special Olympics event was an important one for Kozar, who has worked within SU’s Sport Management Club on its annual charity auction. During that year’s event, the club raised more than $35,000 for Special Olympics. “It brought Syracuse full circle, and it was a special moment to work with athletes who have so much excitement and enthusiasm for their sports,” he says.

The tour staff also organized such activities as a football toss, field goal kick, touchdown dance contest and virtual activities. “We went to more than 48 stops in five months,” says Kozar, who was involved in helping coordinate the myriad logistics and marketing to get people to the tour stop. 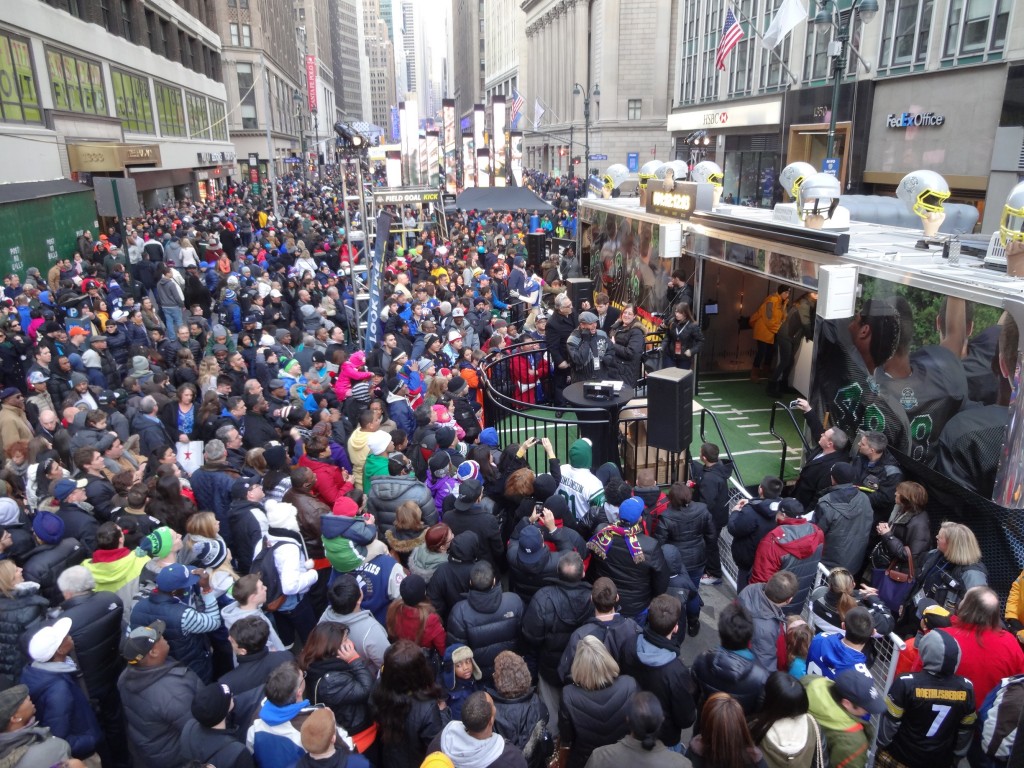 Although his capstone had technically ended, Kozar was asked to stay on up until the Super Bowl, a few weeks into the start of the spring semester.

“I wasn’t sure with school starting how I would be able to do it, but I’m so thankful that the University and sport management were really helpful,” he says.

The last location of the Huddle Shuttle was a stop on Super Bowl Boulevard, a four-day fan experience that shut down a section of Broadway in New York City. The Huddle Shuttle took up half a block and included its activities, along with the touchdown dance ceremony, in which winners were awarded their prizes and three winners tested their dance on stage in front of fans.

Kozar put together stage activities, such as games involving trivia and a spelling bee, to have visitors interact with the tour stop.

“There were over a million and a half people that came to Super Bowl Boulevard,” Kozar says. “It was a great way to end our journey.”

Kozar also worked within the host committee’s Social Media Communications Center during Super Bowl Week. Some team members monitored fans comments and questions; Kozar, as team captain, answered questions, such as what to wear, what was Super Bowl Boulevard and how to get to the game.

By the day of the Super Bowl, Kozar’s team had basically fulfilled all their duties—all that was left was to enjoy the game at Metlife Stadium. Kozar had upper deck seats but it was his first step in the stadium when he felt the impact of the past nine months. 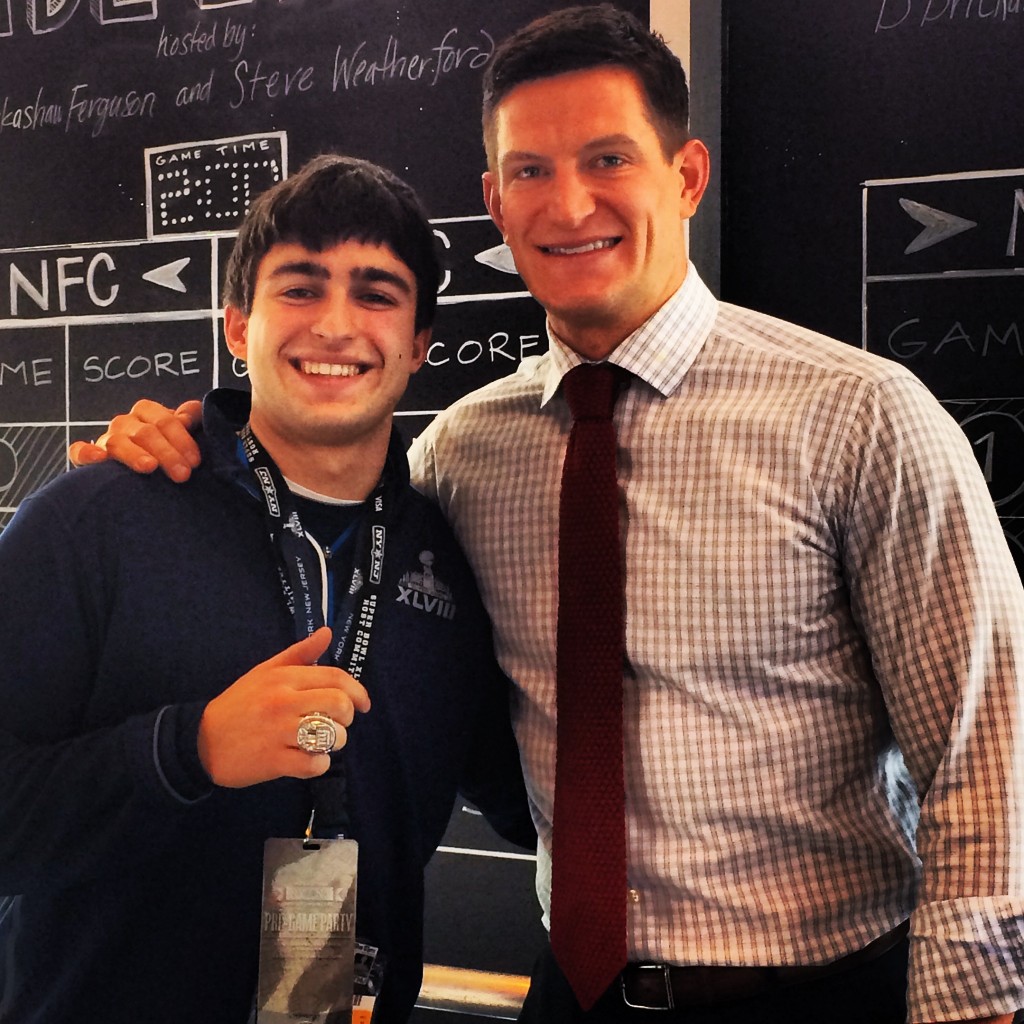 “Once I went through security and into the stadium and saw those huge Roman numerals of the Super Bowl, I saw all the hard work that the entire company, with thousands of people, put together—that was really cool,” he says.

Kozar wasn’t rooting for a particular team, but he was hoping to see a dramatic finish with the best team in offense and their opposition in the best in defense. He also enjoyed the pre-game show with the Syracuse University Marching Band, along with the Rutgers University band, and the half-time show. “It was an unbelievable experience,” he says.

Beyond the game, his time working with the host committee has prepared him for his professional life in many ways.

“I’m a very list, detail-oriented person, but the organization took me to a whole other level of project management and showed me how it touched all these departments,” Kozar says.

After he graduates in May, Kozar wants to work within marketing and sponsorship in the sport industry. “I’m not exactly sure where I’m going yet, but I’m very excited for the future,” Kozar says. “This experience and the experiences I’ve had at Syracuse will lead me in the right direction soon.”