Poet Corey Zeller Is Next Writer in Carver Series 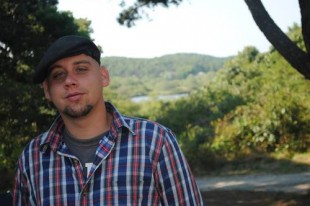 Poet Corey Zeller is the next writer in the spring 2014 Raymond Carver Reading Series at 5:30 p.m. Wednesday, Feb. 12, in Gifford Auditorium. A question-and-answer session will precede the reading from 3:45-4:30 p.m.

Zeller’s 2013 book “Man vs. Sky” (YesYes Books) is a collection of prose poems that addresses the question “What happens to us when we die?” Based on the 2012 suicide of Zeller’s best friend, the work succeeds in expressing “a grief theme like a great jazz piece,” said a review in Devil’s Lake, a literary journal published at the University of Wisconsin-Madison. The poems have “an electric urgency” in their effort to “describe a corporeal existence in which the body has ceased to exist … the topic is grim, but never plunges into total darkness.”

He has worked as an associate editor at the now-defunct Mud Luscious Press and for an online literary site. He currently works in crisis support at a facility for children and adolescents with mental and behavioral issues.

During an April 16, 2013, reading showcasing “Man vs. Sky,”  Zeller urged his audience to write about their own losses. “It’s not going to bring you closer to the person you lost and it’s not going to bring them back,” he said. “It doesn’t have to be in a book. You don’t have to get it published in a journal. Just write something. That’s all that matters.”

SU’s reading series is named for Raymond Carver, the great short story writer and poet who taught at SU in the 1980s and died in 1988, and is presented by the Creative Writing Program in SU’s College of Arts and Sciences.

March 27: Jim Shepard is the author of six novels, including “Project X” (Knopf, 2004) and four story collections, including “You Think That’s Bad” (Knopf, 2011) and “Like You’d Understand, Anyway” (Knopf, 2007). His short stories have appeared in outlets including Harper’s, McSweeney’s, the Paris Review, the Atlantic Monthly, Esquire, DoubleTake, the New Yorker and Granta. He teaches at Williams College in Williamstown, Mass.

April 16: Brooks Haxton G’81 is the author of eight books of original poems and translations from the French and ancient Greek. His books include “They Lift Their Wings to Cry” (Knopf, 2008) and “Uproar: Antiphonies to Psalms” (Knopf, 2004). He is translator for “Selected Poems” by Victor Hugo (Penguin Classics, 2002). His forthcoming book, “Fading Hearts on the River” (Counterpoint, May 13, 2014), follows his son Isaac’s unlikely career as a poker player. Haxton  teaches English in The College of Arts and Sciences.