The Cold Case Justice Initiative (CCJI) at the College of Law has learned that the Department of Justice is closing the investigation into the 1964 death of Frank Morris.

Through one of its standard, hand-delivered letters, the Cold Case Unit in the Civil Rights Division has informed the granddaughter of Frank Morris, Rosa Morris Williams, that the investigation is at an end. As legal representatives of Morris’ granddaughter in matters pertaining to this DOJ and FBI investigation, the CCJI intensifies its call for immediate congressional oversight hearings. The implementation of the Emmett Till Unsolved Civil Rights Crimes Act of 2008 has been a failure up to this point. 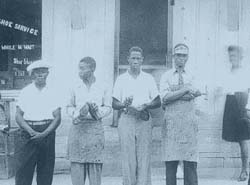 “This letter does nothing to heal the hurt that remains in my heart,” says Rosa Morris Williams. “The ache that my family and I have is unending, knowing that people associated with the murder of my grandfather are still out there.”

“There are people who participated, assisted or learned the truth later that are still alive but have not come forward,” says Rosa Morris Williams. “How many more families must suffer because our government takes short cuts in its investigations of civil rights cold cases?”

“The closing of this case is a shocking display of the government’s lack of due diligence,” says CCJI co-director and Professor Paula Johnson. “The conduct of the FBI and DOJ Cold Case Unit in the re-opening of the Frank Morris investigation is a prime example of the senseless delays of federal law enforcement to thoroughly investigate these crimes as required by Congress that has ended in heartbreaking disappointments for victims’ families.”

The NAACP and the Southern Christian Leadership Conference joined the CCJI in advocating for increased oversight this past summer. Through joint resolutions between the CCJI and these two civil rights organizations, Congress has been asked to look into the conduct of the Justice Department in implementing the Emmett Till Act.

“From the beginning the CCJI had to work overtime to convince the Justice Department to take a serious look at this murder,” says SU law professor and CCJI co-director Janis McDonald. “It took two months to get an FBI agent assigned to the case, months to get the agent up to speed on the facts and many more to get the Justice Department involved. How can the prosecutors be taken seriously when it takes the DOJ three years to interview key witnesses identified by an ex-deputy in the very parish where Morris was murdered? While the Justice Department took its time moving forward on this investigation, the suspect died.”

According to existing evidence, at least two men belonging to a local Klan organization broke into Frank Morris’ shoe repair shop on Dec. 10, 1964 in Ferriday, La., trapped Morris inside and set fire to the building. Although he managed to save his 10-year-old grandson, Morris died four days later of third-degree burns over his entire body.

Rosa Morris Williams sought the assistance of CCJI in March of 2007. The professors not only agreed to help Williams but Ferriday-based reporter Stanley Nelson at the Concordia Sentinel, who was already aggressively investigating Morris’ death for his newspaper, as well. By late December 2007 the CCJI had provided the U.S. Attorney’s office with the names of witnesses to be interviewed and related documents collected to date that demonstrated a coordinated effort by various Klan groups in Louisiana and across the Mississippi River to Natchez.

“We urged the DOJ to create a regional task force be set up to explore the workings of the Klan groups in both Mississippi and Louisiana because we know these groups shared information and exchanged three-man ‘wrecking crews,’” says Johnson. “These crews were authorized to perform various types of punitive sanctions against African Americans and their allies, ranging from cross burnings, to threats, to beatings and even to exterminations. One supervisor of these wrecking crews from Ferriday, La., is still alive and living a normal life in Ferriday. His role has not been challenged.”

The co-directors say the FBI and DOJ had important leads throughout the investigation that they summarily dismissed.

“In one instance, a witness came forward to report that he saw three white men confront Frank Morris the night of the incident,” says McDonald. “His possible identification of one of the men was never taken seriously because he was 13 at the time of the crime. It was not until CCJI informed the U.S. Attorney for the Western District of Louisiana of this lapse that he was interviewed briefly by telephone. In another instance, the two police officers who lied about their activities immediately before showing up at the fire, and who evidenced cooperation, if not membership in various local Klan groups, were never challenged. Their role is not even mentioned in the letter to Ms. Williams.”

“It is time for Congress to examine the false promises made to the families like the Frank Morris family. Congress must look into the failures of federal and local law enforcement related to the Emmett Till Unsolved Civil Rights Crimes Act,” says Johnson. “We will not stop looking for fresh leads and information on this case and hope people who know the truth will do the right thing and speak up.”