Q & A: Robert Murrett on Security at the Sochi Olympics 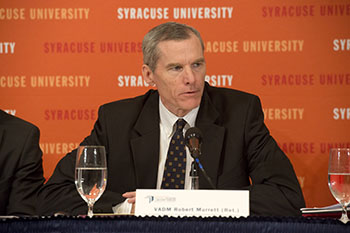 Security has been a major concern for the Winter Olympic Games in Sochi, Russia, which begin Friday, Feb. 7. Retired U.S. Navy Vice Admiral Robert B. Murrett, deputy director of the Institute for National Security and Counterterrorism and professor of practice in public administration and international affairs at the Maxwell School, answered some questions about security at the upcoming games.

Q. Are these Olympic Games more dangerous than previous ones? If so, why?

A. All of the Olympics are a target for attacks, and there is history with insurgent elements in Russia and the Caucasus region that has relevance to these events. We should note, though, that we had a bomb attack at our own Olympics in Atlanta some years ago, and the attacks at the Munich Olympics in 1972 reflected the potential for lethal attacks.

A. Russia and the IOC are doing all that they can to make the games secure, given the location and threat environment in the Caucasus region. The post-Soviet wars with Chechnya, continued unrest in nearby Dagestan, etc., are all in general proximity to Sochi. Probably it would have been better to have the Olympics in St. Petersburg, Vladivostok or the like.

Q. Who is the most at risk as far as security goes?

A. Actually, one of the greatest risks is an attack at another location linked indirectly to the Sochi games. Insurgents could mount an attack elsewhere in Russia or against Russian facilities internationally, which have less security than at the games themselves.

Q. Will the amount of security at these games detract from the event itself?

A. Security could detract from the games, but if handled professionally, that won’t be the case. We’ll see.

Q. If you were thinking of attending the games, would you judge it safe?

A. For the most part, and we certainly hope to get through the games without any incidents at all.