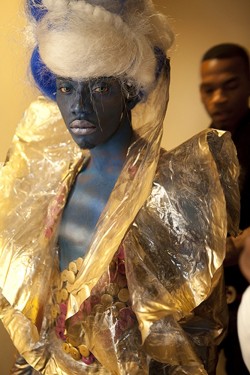 Light Work is presenting Gerard H. Gaskin’s “Legendary,” through Aug. 8 in the Robert B. Menschel Photography Gallery in the Schine Student Center.

A lecture sponsored by the Syracuse University LGBT Resource Center will be held on Wednesday, Feb. 12, from 7-10 p.m. in 304ABC Schine Student Center. The talk is free and open to students and community members. The exhibition is open daily from 10 a.m.–10 p.m.

Gaskin’s radiant color and black-and-white photographs take viewers inside the culture of house balls, underground events where gay and transgender men and women, mostly African American and Latino, come together to see and be seen. At balls, high-spirited late-night pageants, members of particular “houses”—the House of Blahnik, the House of Xtravaganza—“walk,” competing for trophies in categories based on costume, attitude, dance moves and “realness.” In this exuberant world of artistry and self fashioning, people often marginalized for being who they are can flaunt and celebrate their most vibrant, spectacular selves.

“Legendary,” composed of photos taken at events in the New York city area, Philadelphia, Richmond and Washington, D.C., is a collaboration between Gaskin, a camera-laden outsider who has been attending balls for 20 years, and the house members who let him enter the intimate world of ball culture.

Gaskin is the winner of the 2012 Center for Documentary Studies/Honickman First Book Prize in Photography, selected by Deborah Willis. A native of Trinidad and Tobago, Gaskin earned a B.A. from Hunter College in 1994 and is now a freelance photographer based in the greater New York City area. His photos have appeared in the New York Times, Newsday, Black Enterprise, OneWorld, Teen People, Caribbean Beat and DownBeat. Among his other clients are the record companies Island, Sony, Def Jam and Mercury.

Gaskin’s photographs have been featured in solo and group exhibitions across the United States and abroad, and his work is held in the collections of such institutions as the Museum of the City of New York and the Schomburg Center for Research in Black Culture. Gaskin has been awarded the New York Foundation for the Arts Artist Fellowship for Photography and was part of the Gordon Parks’ “90,” the bringing together of 90 black photographers from all over the United States to celebrate his 90th birthday. His work is also featured in the books “Inside the L.A. Riots” (1992), “New York: A State of Mind” (2000) and “Committed to the Image: Contemporary Black Photographers” (2001).