From Fight Ring to Business Enterprise 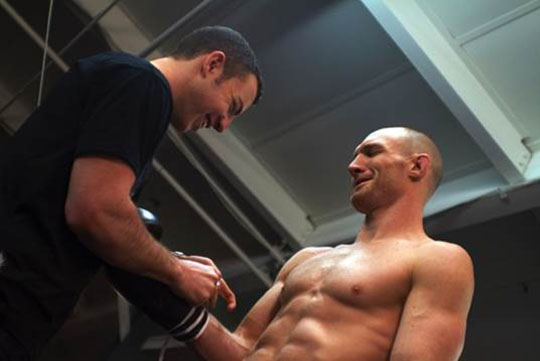 In the fight ring, the individual competitor stands alone, backed only by his resolve and weeks of grueling training.

For Daniel Goldberg ’15, that mental stamina and discipline he developed as a Muay Thai fighter translates well into his role of entrepreneur.

“Boxing and business go hand in hand because ultimately it’s the amount of time you put into the business—or into the ring—that’s going to make the difference,” Goldberg says. “If you’re running four miles, potentially your opponent could be doing five, so you better do six. That’s the competitive mentality of thinking someone else could be doing more, so I have to be better prepared come fight day.”

A junior information management major in the School of Information Studies, Goldberg has been putting his mental energy and time since he was 16 into developing his own line of hand-crafted protective athletic gear. Golden Gear, which offers such products as shin pads, head gear and gloves, sells in more than 20 retail stores and gym pro shops; on eight online sites, as well as the Golden Gear site; and direct to several gyms.

Goldberg built the business out of a love for the sport, and necessity. 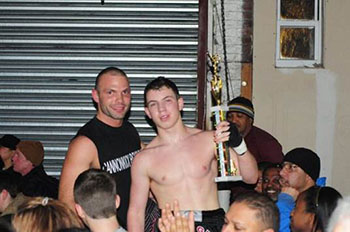 Goldberg after a fight with his first trainer, Val Stoyanov, who is now a part-time sales rep for Golden Gear.

He was 11 years old when his parents took him to the local gym and he started working with trainer Val Stoyanov, who recommended he try Muay Thai, a type of kickboxing in which participants can use their elbows and knees along with their hands.

“Ever since I threw my first jab cross-combo I was completely hooked on the sport,” says Goldberg, who is from Long Island.

Goldberg won his first fight at the age of 16 and was eager to start training for the next competition, but he was beset by injuries to his shin and wrist and a cut above his left eye that needed 14 stitches. “I was frustrated that my gear couldn’t keep up with the intensity of my training. I thought if I was getting injured as an amateur, the professionals must also be getting injured,” he says.

He saved up money from working in the gym and began putting his plan together. He bought gear from various companies, had fighters use the equipment and then disassembled the equipment to see what worked and what didn’t.

“I contacted overseas manufacturers and talked to them about new technologies and ideas I had and then blended them together,” Goldberg says.

His products are handmade in Thailand, where he has been traveling to since he was in 11th grade.

There have been times when he thought maybe he was too young to be pursuing such an idea, but the feedback on the products kept him going. “I had top-level professionals coming to me to say my gloves were better,” he says. “I was just very confident that no one else was making a better equipment line, so I thought I was able to go out and really make this happen.”

Goldberg arrived at SU last fall as a transfer student from Bentley University, a business school outside Boston.

“I wanted something that was more focused more on entrepreneurship,” Goldberg says. “You don’t even have to be in EEE program [Entrepreneurship and Emerging Enterprises department in the Whitman School] to participate in all the entrepreneurship programs.”

Goldberg works within Whitman’s Couri Hatchery and in the Student Sandbox in the Tech Garden in downtown Syracuse, both student business incubators.

He credits his mentors and professors with reframing his mission from providing a “luxurious” fight line to providing a high-end line that puts safety first. “My mission is to help every fighter get to the next level and have a more successful career and better equipment that will protect him or her,” says Goldberg, who also credits his family with being helpful and supportive. 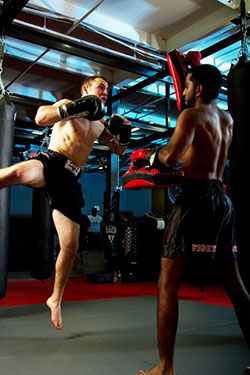 His newest collection, ReAktion Series, was developed through consultation with a hand surgeon and trainers. “We’re developing a glove that keeps the hand and wrist perfectly aligned,” he says. “We’re also creating a closure system that reacts with your every move.”

Goldberg won $500 in the IDEA Juicer competition, in which students pitch their ideas to a panel of judges. He also showed off Golden Gear equipment in January to a new member of campus, Chancellor Kent Syverud.

“I was super impressed that he came to the Tech Garden, especially his first day, to spend time with students,” he says. “I told him about how our sales have doubled since last year and a big part of that is the support of the Student Sandbox, the Couri Hatchery and the mentors and professors.”

Goldberg hopes for even better results once he graduates.

“I truly believe by 2016 Golden Gear will be all over the U.S. and that’s when I want to enter the international market,” he says. “By 2018, I want Golden Gear to be a household name in the combat sports industry.”

One thing in the midst of running a business that has taken a back seat has been his own time in the ring.

“Since I started the business I haven’t had time to compete,” he says. “I would love to get back in the ring, but my mom always says stick to business.”