Endowment to Support Symposium: A Quarterly Journal in Modern Literatures

When he arrived on the Syracuse University campus in 1988, he was chair of the Department of Languages, Literatures and Linguistics (LLL). Today, Harold G. Jones is an emeritus professor of Spanish, a philanthropist and, most recently, the man responsible for establishing an endowment to support Symposium: A Quarterly Journal in Modern Literatures. 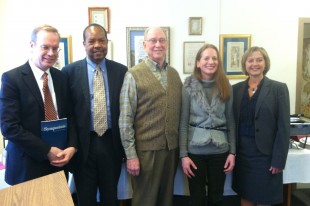 The long-time faculty member, who taught in The College of Arts and Sciences for 23 years, has donated $160,000 to create an endowed fund to support activities that promote the scholarly reputation of the journal and broaden the sphere of its outreach.

“I can remember the first time I was exposed to Symposium. I was an undergrad at Brown University and not quite sure of the academic track I wanted to take,” Jones says. “But it became very clear after reading the journal’s articles that my passion for language, learning and culture would be what would guide my career for years to come. Guaranteeing that other young scholars have access to this publication is not only important to me, but also critical for the future of the study of modern literatures.”

Founded in 1946 at SU, Symposium is a quarterly publication edited by members of LLL in collaboration with 29 associate editors from premier institutions in the United States and abroad. The department’s leadership has positioned the journal as one of the world’s leading periodicals on modern literatures. Contributions, often comparative in scope, examine literary texts written in languages other than English.

Amy Wyngaard, the journal’s executive editor since 2007 and professor of French, has ambitious plans for Symposium’s future, many of which Jones’ endowment will support.

“Amy is prepared to take Symposium to the next level,” Jones adds. “Her energy is infectious; her ideas, big; and her commitment to scholarship in modern literatures is unwavering. With Amy at the helm and with this endowment firmly in place, I have no doubt the journal will continue to thrive in the coming years.”

“There aren’t enough words in the English language—or in Spanish or French, for that matter—to express how thankful our department is for Harold’s generosity,” Wyngaard says. “He has given so much of himself to this institution and to the journal. The humanities are the heart and soul of any liberal arts education and Harold’s commitment to this field is truly remarkable.”

Published and distributed by Taylor and Francis Group, Symposium is distributed via print and electronic copy to more than 1,900 institutions worldwide.