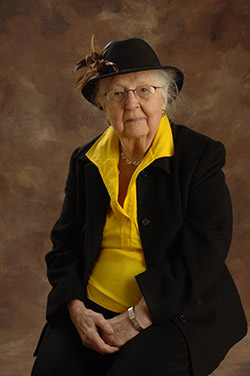 Syracuse University has lost one of the oldest, most dedicated members of its extended family. Mary Gilmore Smith ’29, G’38, student, teacher, counselor, volunteer and philanthropist, passed away Saturday, Jan. 18, at the age of 106.

“Every Syracuse University alumnus is special to us, but Mary Gilmore Smith was truly the kind of person who comes along once in a lifetime,” says Bethaida González, dean of University College. “She made her mark on the University in so many ways—as SU’s longest-standing annual donor, as a counselor to women who studied here and as a community activist. It’s hard to imagine what SU would have been like without her.”

While many SU alumni and friends have strong ties to the University, few have had a direct connection for nearly 90 years. From her days as an English student during the 1920s to earning a master of arts at SU’s graduate school in the 1930s to decades of counseling and service to others, Smith was a tireless advocate for women in higher education.

In 1938, Smith was named the first vocational counselor of women at SU. While serving as social director and acting dean of women for summer sessions (1938-1941), she was made an honorary member of Eta Pi Upsilon, the nation’s first undergraduate women’s honorary society.

Smith’s SU connections even carried over to her marriage, when she wed Edward Allen Smith, an SU business law instructor, at Hendricks Chapel in 1940. But at the time SU’s policy prohibited spouses to be employed by the University, so she resigned her position the following summer to become a homemaker. Despite leaving the University she kept her drive for service, playing an active role in several community organizations.

Smith returned to SU in 1957, serving as assistant dean of the College of Home Economics and as student dean counselor. From 1963 to 1972, she was an academic counselor in the Women’s Center at University College. There, she and colleague Nancy Callahan Gelling started the Eta Pi Scholarship Program, which provides financial assistance to women studying part time at SU.

Thanks to her unwavering support of the Eta Pi Upsilon Endowed Scholarship Fund, Smith has the longest giving history of any annual donor at Syracuse University. She also consistently supported the Edward A. Smith and Sheridan Gilmore Smith Memorial Library Fund, named for her husband and son for the purchase of rare books and manuscripts, and the J. Winifred Hughes Endowed Scholarship Fund.

Upon her retirement in 1972, Smith worked for 18 years as director of RSVP for the Volunteer Center in Syracuse. She also remained an active member of SU’s alumni community, returning to campus for countless celebrations and special events.

A Century of Orange Spirit

On Nov. 1, 2007, more than 120 SU alumni and friends celebrated Gilmore’s 100th with a surprise party at Drumlins. Click here to view a clip from the birthday celebration video.

The following day, Smith was honored for her philanthropic efforts during the kickoff event for The Campaign for Syracuse University, the most ambitious capital campaign in SU’s history. View a video clip here.

Smith’s many recognitions include the Chancellor’s Citation and Melvin Eggers Senior Alumni Award (1994) and the Ollie Owen Award for Outstanding Community Service from RSVP (2000). In 2004, she was inducted into the archives of the Women’s Hall of Fame in Seneca Falls.

Smith is survived by her daughter, Elizabeth Smith Hakanson ’67, G’71 of Syracuse, numerous grandchildren and several generations of nieces and nephews. A memorial service will be held at a later date at Plymouth Congregational Church in Syracuse.