‘Pictures at an Exhibition’ to Be Performed with Organ, Trumpet at Feb. 2 Malmgren Concert

Modest Mussorgsky’s “Pictures at an Exhibition” will be the centerpiece of the next Malmgren Concert in  Hendricks Chapel on Sunday, Feb. 2. 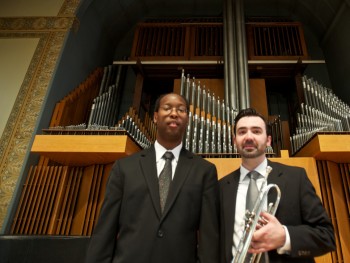 SU Organist Kola Owolabi and Gabriel DiMartino, trumpet instructor in the Setnor School of Music in the College of Visual and Performing Arts, will perform transcriptions of the piece for piano and organ. The concert will begin at 4 p.m. and is free and open to the public. Parking will be available in the Q1 lot (on space available basis and for those with handicapped stickers) and in the Irving Garage. Originally composed as a suite for solo piano, “Pictures at an Exhibition” has been transcribed for orchestra by numerous arrangers, including Maurice Ravel and Leopold Stokowski. This performance features yet another combination. Owolabi and DiMartino will perform several other works as well, including “Concerto in D Major, Op. 7, No. 6” by the Venetian baroque composer Tomaso Albinoni. The concert is part of the Malmgren Concert Series at Hendricks Chapel. The series was made possible by a generous gift to Hendricks Chapel from alumna Esther Malmgren ’42 in 1991. The free concerts, held throughout the year, feature a wide variety of music. Upcoming concerts in the 2013-14 Malmgren Concert Series are the University of Louisville Cardinal Singers (March 23), A Rising Star Recital featuring organist Thomas Gaynor (April 6) and the Hendricks Chapel Choir’s Spring 2014 concert (April 27). For more information, call Hendricks Chapel at 315-443-2901 or visit http://hendricks.syr.edu.