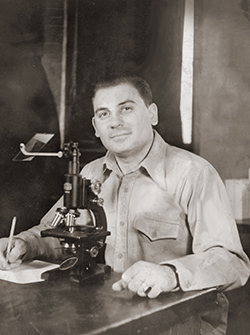 Alfred T. Collette, former chair of science teaching, died on Jan. 23. He was born in Syracuse on Sept. 10, 1922, the son of Samuel and Palma Quinto Collette. He was preceded in death by his father, mother and sister Antoinnette, and is survived by a niece Patricia and a nephew, Mitchell Pines.

“Dr. Collette was mentor to many people in the Syracuse University community. During his more than 50 years on the Hill, he touched the lives of too many students, colleagues and friends to count,” says Domenic Iacono, director of the SU Art Galleries. “He had two longstanding appointments at the University—head of the Science Teaching Department and the University Art Collection. Alfred had a passion for teaching, learning and improving the skill of our educators. He also had a passion for collecting art—anyone who visited his home was amazed by the museum-like atmosphere of his house on Brattle Road. He will be missed.”

Collette served in World War II as a weatherman in the Pacific, providing weather information for the dropping of the atomic bomb. After the war, he completed his undergraduate education and taught science in Cherry Valley, N.Y., then went on to Syracuse University to earn a doctorate in zoology.

He worked for more than 50 years at Syracuse University, serving as a researcher, teacher and administrator. For a short period of time he was the chairperson of the zoology department and for more than 30 years as the chairman of the Science Teaching Department, where he earned national and international recognition as a science educator known for methods of teaching science in the secondary schools. In addition, Collette was the director of the Syracuse University Art Collection for more than 30 years.

In 1959, Walther Thurber and Collette produced the first edition of “Teaching Science in Today’s Secondary Schools.” The textbook has been one of the most widely used resources for science teacher training. The book continues to be published under the title “Science Instruction in the Middle and Secondary Schools,” having been used in the United States and other counties for more than 50 years.

Collette was a successful grant writer who brought in many millions of dollars to support the Department of Science Teaching, especially the funding for hundreds of graduate students, many of whom have gone on to distinguish themselves in science teaching. His influence continues through his graduate students, who have received many awards and distinctions for advancing science education at universities, state departments of education and school districts across the nation.

Professor Collette was knowledgeable about paintings and prints. Under his direction, the collection expanded in quantity and quality. Collette created a single inventory of all the art owned by Syracuse University, established a monetary value (appraisal) for the collection and provided proper care and storage for the pieces. In addition, the collection held many important exhibitions that featured the art from many periods and countries—American, European and Asian. Collette was also responsible for more than 50 publications by the art collection.

A memorial service for Collette will be announced at a later date.